Giving the World a Hug: Neshama Carlebach, and the Legacy of Shlomo Carlebach 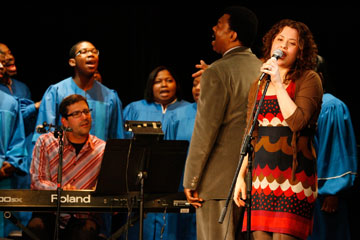 Leadel.net, a Jewish media hub showcasing the rich variety of contemporary Jewish voices and expressions, has a great video on Neshama who is carrying on her father’s legacy of music and song. Wait until you hear the choir sing “Lord Get me High”. In honor of Rabbi Shlomo Carlebach’s 17th Yahrtzeit:

While she”s a habitual name in many Jewish homes, few have had a chance to hear her talk. Walking in the footsteps of her father, Rabbi Carlebach Zaz”l , she has trusted herself with the mission of taking both: his music and his Torah to the next generation. One that not only talks about Woman”s place in Judaism, reigniting spirituality in orthodox tradition and reaching out to people of other faiths, but actually lives and acts on these values day to day.