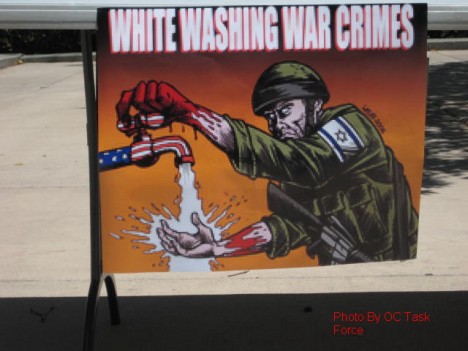 Support for terrorism, hate speech, and blatant anti-Semitism on California college campuses is an issue that we have covered extensively here at Jewlicious over the last few years. The California Assembly has now passed a resolution condemning this activity. This acknowledgment by the Assembly is merely symbolic, but it does bring needed attention to the level of vitriol and anti-Jewish activity by professors and students alike at state sponsored schools.

With the new school year started, we can safely assume that the level of this activity will not abate but grow stronger as more and more professors and students call for BDS while continuing to demonize those with pro-Israel sympathies.

With no debate, lawmakers on Tuesday approved a resolution that encourages university leaders to combat a wide array of anti-Jewish and anti-Israel actions.

â€œCalifornia schools need to recognize that anti-Semitism is still a very real issue on college campuses around the stateâ€”it did not disappear with the end of World War II,â€ said Assemblywoman Linda Halderman, R-Fresno, the resolution’s author.

Most of the incidents of anti-Semitism the resolution cited are related to the Israel-Palestine debate. These include instances of protesters comparing Israeli police to Nazis and urging support for Hamas.
The resolution, which is purely symbolic and does not carry policy implications, also condemns the suggestion that Israel is a â€œracistâ€ state and that Jews â€œwield excessive power over American foreign policy.â€ The resolution characterizes the student campaign to pressure the University of California system to divest from Israel as anti-Semitic, and applauds university leaders’ refusal to consider it.

The Council on American Islamic Relations said the resolution went too far and constituted an attack on students’ right to free expression.

â€œTo be clear, genuine acts of anti-Semitism should be condemned, but this resolution goes far beyond that,â€ said Rachel Roberts, a spokeswoman for the group. â€œBy characterizing pro-Palestinian speech as anti-Jewish, the Legislature sidelines those Muslim students and progressive Jewish students who often organize together to raise awareness about the Middle East.â€

Roberts said the council was disappointed that the resolution was drafted and passed while California colleges were out of session.

Pro-Palestinian protests have become a regular occurrence on many University of California campuses. Students sometimes use sensational tactics including simulating checkpoints and combining swastikas with the Star of David.

In 2010, 10 Muslim students were convicted of misdemeanors for repeatedly interrupting a speech by Israeli Ambassador Michael Oren at UC Irvine, where students were suspected of painting swastikas in university buildings.

The Assembly’s actions also drew criticism from free speech advocates. Carlos Villarreal, director of the San Francisco chapter of the National Lawyers Guild, called the resolution irresponsible and dangerous because it combines legitimate condemnations of acts of intimidation and hate with specific objections to tactics used to support the Palestinian people.

â€œIn doing so, it can be seen as having no other purpose than to demonize all those who criticize the nation-state of Israel or support the rights of the Palestinian people,â€ he said.

Halderman did not mention Israel when she introduced HR35, which passed on a voice vote with 66 of the Assembly’s 80 members signing on as co-authors.

Some of the lawmakers who signed on as co-authors when the resolution was called on the floor seemed surprised to later learn of the references to Israel. Assemblyman Tom Ammiano, D-San Francisco, was one of the few who did not support it.

â€œIgnorance reigns up here,â€ he said.

â€œWe absolutely have to have colleges and universities that are free from anti-Semitism,â€ Lowenthal said. â€œBut we just have to be careful that we don’t accidentally silence legitimate debate as we try to shut down organized hate.â€

The California Legislature has no Muslim members, according to the council.
http://www.mercurynews.com/news/ci_21419725/calif-lawmakers-denounce-anti-semitism-colleges