I’d never been to a Jewlicious conference before â€” I graduated from that demographic during the Clinton administration. But I drove down this time to lead a discussion on Israel with Consul General of Israel David Siegel, and once I came on board, I didn’t want to leave. 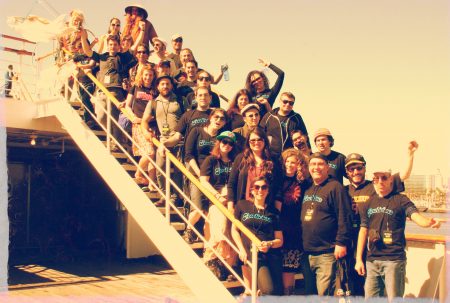 Rob Eshman, Editor and Publisher of the Jewish Journal – Original Article appeared in print and on website.

Saturday afternoon on the upper deck of the Queen Mary, six young Jewish adults were engaged in a heated discussion. The topic: Men or women– who’s hornier?

I overheard it, and marveled at the participants– a group of people you wouldn’t ever expect in the same room: a svelte dark-haired woman in skinny jeans and tight top; a man with the long beard and knitted kippah of a Chasid; a couple of guys of the buff, secular Israeli type; a blond-haired woman in a modest skirt; and a man whose tzitzit spun about his waist as he gestured while making his points.

Women have a much stronger sex drive, the man with the tzitzit said, but society forces them to suppress it. Then, as if to answer the unasked challenge â€” How would you know? â€” he added, â€œWhat happens at Jewlicious, stays at Jewlicious.â€

Jewlicious is an annual gathering of Jews, ages 18 to 36, that celebrates and explores all the different ways of being Jewish. There are reggae and rock bands. There are at least five kinds of religious services. There is Torah-inspired yoga, and a guy promoting the healing properties of marijuana, and talks about serving the poor, and about why â€œJewroticaâ€ is better than erotica, and kabbalah, and at least 60 other topics, speakers and activities.