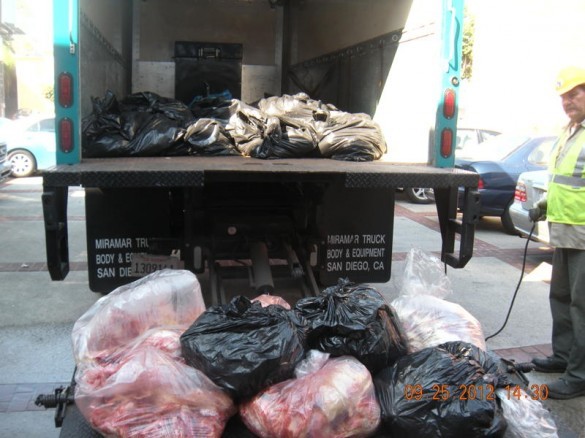 When one participates in the custom of kaparos today one is actually committing the following transgeressions:

1) Cruelty to animals, tzaar baal ha chaim as animals die of heat exhaustion and other ailments while crammed into small cages before the ritual is performed.

2) Creating neveila, a wasted life of an animal. As the Chayei Adam , a great Jewish religious authority of the 19th century wrote, the shochet, a ritual slaughterer often does not have the time to properly check their knives as they perform hundreds of cuts. When a kosher animal is killed with a unchecked and/or nicked knife – the animal is considered a nevaila and unfit for consumption. Worse yet, in some cases the people performing the ritual are not shochets at all.

3) Wanton wasting of resources, baal tashchis — People go hungry in cities across American and Israel, yet we are taking perfectly good food and wasting it. The ritual is creating food which is going to waste.

4) Transgressing local laws, dina d’malchus dina – Mass slaughter of animals in densely populated areas, without sanitary conditions, may be against the law in your city, and likely in all other American cities. Yet, despite repeated warnings by local authorities, the kaporos industry continues.

In addition one is potentially the victim of unscrupulous and duplicitous behavior, gneivas daas. When one purchases chickens for use in the ritual one believes that the chicken, or money from the sale of the chicken, is going to tzedakah. In fact, here in America, these chickens are often found in dumpsters.

Today, because it is impossible to do it in a kosher way, we must perform the ritual with money. Rabbinic sources including the Chayei Adam and Mishna Berurah are clear that when the ritual cannot be performed in a kosher way it is preferable to use money.

Please wave money – not chickens – and donate the funds to local charities for poor families.