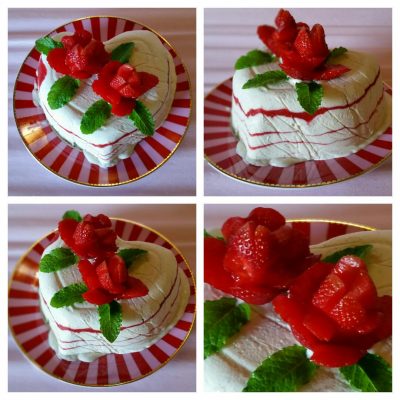 CK laughed about that one, so…

There’s been some fuss on the internets about two-ingredient ice cream that doesn’t require an ice cream maker. The concept sounded too good to be true and too easy to be good, but I gave it a try anyway.
Ten minutes of work and four hours of freezing later, I was the owner of about two quarts of delicious, rich homemade ice cream.

Here’s how:
600 ml whipping cream – Whip until stiff.
Stir in 1 can of slightly sweetened condensed milk (approximately 400 ml; Russian supermarkets usually carry those if you cannot find them anywhere else).

Add flavouring ingredients of your choice.

Transfer to freeze-proof food containers with a tight lid and put into your freezer for four hours for ready-to-serve ice cream. (For the strawberry-vanilla heart, I used a pudding mould, which I lined and covered with cling film).
If it stays in the freezer longer than that, it gets harder, and you might want to take it out of the freezer a little ahead of serving for the ice cream to soften a bit.

Varieties for which I used half of the aforedescribed ice cream base included:
– lemon-meringue: Stir 3 generous tbsp lemon curd, some concentrated lemon juice, lemon zest into the ice cream base. Fold in a handful of coarsely chopped meringues (I used store-bought ones).
– moccha: Prepare coffee essence by boiling 3 tsp instant espresso dissolved in about 150 ml of water until most of the water has evaporated and the consistence is syrupy. Let cool. Stir coffee essence and 1 tsp of good quality unsweetened cocoa powder into the ice cream base. To taste, fold in dark chocolate shavings and chocolate coffee beans (about 50 gr of each give you enough of a little something with each spoon).
– vanilla-strawberry: Add a copious amount of real vanilla extract to the ice cream base. Either use a store-bought strawberry dessert sauce or make your own by purreeing fresh strawberries with some sugar.
Start by pouring 2 tbsp-full of the vanilla into the centre of a mould or food container. Don’t spread! Pour 2 tbsp of strawberry sauce right on top of the vanilla. Start over with the vanilla again. Alternately add the strawberry sauce and vanilla ice cream-to-be until either everything’s used up or your vessel is full. Don’t spread or stir; just cover and transfer to the freezer as-is. The result will be a beautifully striped ice cream. 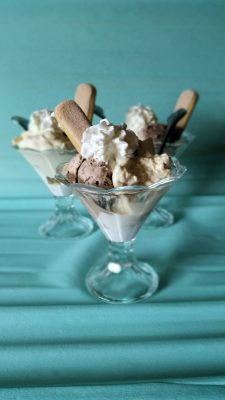