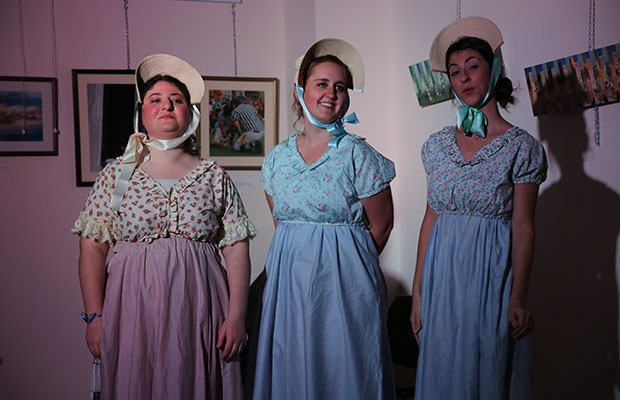 Looking for some quality English theater this Chanukah season?

The Association of Americans and Canadians in Israel has taken on perhaps its most daunting theater challenge yet with the staging of the Jane Austen classic “Pride and Prejudice”. As a book and beloved comedy/drama known to many, expectations were high as audience members anxiously awaited their favorite scenes, and those expectations were met and exceeded!

The production is set in high-society England where the audience is introduced to the Bennet family and their boisterous yet ill-mannered mother who is determined to marry off each of her five daughters. The story ensues with glimpses into the lives of the Bennet girls and their respective suitors who present us with moments of humor, outrage, reflection and ultimately romance.

Under the direction of Yael Valier, the 2.5 hour performance boasted accuracy of production and theatric flare in costumes and set design. “Pride and Prejudice” at the AACI has been graced with a talented cast of actors who drew the audience in with their convincing performance, comic timing, spot-on British and Scottish accents and ballroom dance finesse.

Of particular note were performances by the stubborn yet witty Elizabeth Bennet (played by Elisheva Giventer), the arrogant yet kind Mr. Darcy (played by Evan Gadol), and the sweet and gentle Jane Bennet (played by Amanda Keehn). The Bennet parents played off of one another particularly well, with Yardena Buxner’s cringingly over-the-top (in a good way) performance of Mrs. Bennet and Jonathan Cohen’s intelligent yet-exhausted-by-his-stage-wife’s performance as Mr. Bennet. Chagit Moriah Gibor was brilliant as the infuriatingly pompous Ms. Bingley, and I wanted to jump on stage and slap some sense into young daughter Lydia (played by Yael Abramowitz) to prevent her from running off with the sly and deceitful Mr. Wickham (played by Raphael Poch), which means that their portrayal was pretty darn ‘on’.