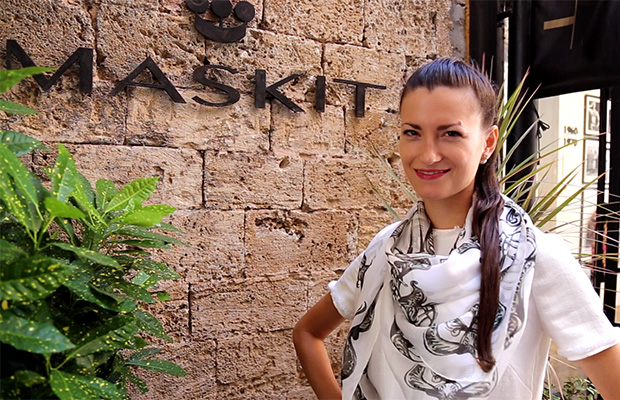 Join us as we visit epic sites in Israel that are a little off the beaten path!

We wandered over to Old Jaffa, where, after passing the eclectic and colorful flea market, we found ourselves at the storefront studio of Maskit, Israel’s first and only fashion house.

Maskit was founded in 1954 by Ruth Dayan, the first wife of famous Israeli general Moshe Dayan. At the time, Israel was only 6 years old, a poor country struggling with the absorption of refugees from the Holocaust as well as those escaping from the Middle East. Maskit was not a frivolous fashion statement, but rather a government-sponsored make-work project seeking to utilize the sewing and handicraft skills of Israel’s diverse new immigrants. Maskit was actually quite successful internationally, gracing the covers of fashion magazines like Vogue. Maskit clothed brides, fashionistas, celebrities, and royalty alike. At the height of its success, Maskit had 10 boutiques in Israel and one in New York. Their clothing could be found at such high-end retailers as Saks Fifth Avenue, Bergdorf Goodman, and Neiman Marcus. The brand went on hiatus when it was privatized and subsequently declared bankruptcy in 1994.

More than two decades later, Maskit is back. And, against all odds, it’s still headed by 97-year-old Ruth Dayan — this time, in partnership with Sharon Tal, a former Alexander McQueen designer. Tal resurrected the brand after she decided to return to Israel. The store is also the atelier, where you can see seamstresses hard at work creating beautiful designs, many accented by intricate beadwork and embroidery. The overall aesthetic is very feminine and delicate, with subtle but ambitious touches that are understated by Israeli standards, yet devastatingly gorgeous.

All are encouraged to visit the store in Old Jaffa at 2 Mazal Dagim Street, Tel Aviv, where you can find out more about Maskit and experience the clothing and the history yourself.

Visit www.israel.travel for more info on travel in Israel