Love and Lust in Jerusalem 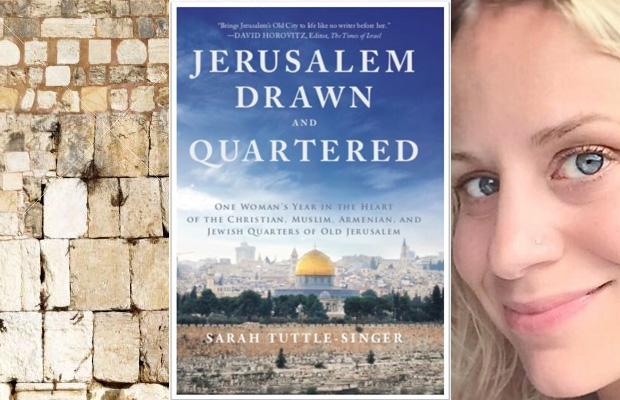 Before diving into Jerusalem Drawn and Quartered by Sarah Tuttle-Singer (Skyhorse Publishing, due May 8, 2018), I wondered, what more might be said about Jerusalem that hasn’t been presented over centuries?

Moreover, how is Tuttle-Singer, with a reputation as a social media virtuoso, in a position to write a meaningful book of polemology that practically defines Jerusalem? Can this lurching work in progress I know from her posts on social media bring clarity to the world’s holiest City imbued with the Divine Spirit?

Sarah does so much better.  The book is one idiosyncratic, irresistible fast-read, revealing nitty-gritty life in the City.  She humanizes Jerusalem. Gone are screaming headlines. No polemics. No religious zealotry. No blazing battles over nationalism.

It is a tale about a young American woman coming of age in an explosively young country. Sarah moves into an ancient but vibrant City coming into its own after centuries of being drawn and quartered. If it were a book just about Sarah’s life it would be ordinary. But she has a comfortable writing style that carries the reader along with her.

Her mind works like an artist’s eye letting Sarah view her surroundings differently than most other people. Her personality is relatable, and together these functionalities result in her weaving two trendy topics, her personal growth and that of the bracingly straightforward modern Jerusalem. Her stories stimulate all five senses, and Sarah is a marvelous storyteller.  “The street smells like coffee and ripe strawberries and saffron. You can buy bags of pink and blue almonds, and Christmas lights during Ramadan, to illuminate the night.”

Sarah offers snippets of the Old City’s history, politics, and religions mingling with her stories about the daily life of shopkeepers, residents, and tourists. All who pass through its gates, she discovers, share her love and lust for the Old City and its people.

Sarah is a mix of Holden Caulfield and Lady Bird propelled by her Jewish soul. Sarah flashes revelatory memories of teenage rebellion and angst. Memories of her mother take on context and new meaning for Sarah in her adulthood and motherhood. We watch Sarah learn to be an adult and like herself. Jerusalem is no longer allowing its bad memories of being drawn and quartered hold it back and Sarah’s bad memories help her find her own voice.

Sarah is notoriously independent and flouts societal norms and expectations. At the same time, she reveals herself to be a hena, i.e., a very sweet, beautiful girl, whose interactions with strangers evoke a smile and trust getting them talking. She tells about her conversations with the Palestinian taxi driver boyfriend of a Jewish Israeli, and the ultra-Orthodox wife and mother starving for affection. The cold stone Old City can appear rough and raw, but believers and the faithful can touch the indentation in one wall “left by Jesus Himself when he stumbled and almost fell.”  When Sarah touches the cold Jerusalem stone, she feels warmth from the spot.

Sarah defines herself a patriotic Jew choosing to live in her homeland, while yearning for a connection with ultra-religious Jews, Christians, Muslims, and Armenians. Sarah cringes at the limited interaction between them. “We all live in different worlds” in the same four quarters. It’s a chasm she tries to bridge. She and the City are hip and novel today, centers of attention. “Cell reception sucks in the Old City. It’s like, the closer you get to God, the worse the network and the harder to communicate with humans.”

The Damascus Gate is it’s most interesting entry point, “Where old women sit cross-legged in the sun and sell ripe figs, where ultra-Orthodox Jews enter the Muslim Quarter in their black hats and black suits to get to the Yeshiva or the Kotel, where tourists waft down the steps into the shuck speaking French or Italian or Russian, where young guys speaking Arabic with gelled hair are frisked and searched without any reason other than the fact that they’re young guys speaking Arabic, where you won’t see any Jewish Birthright groups because they’re warned ‘It isn’t safe.’”

There are three subjects this reviewer prefers the author explored in more depth. I want to know more about her failed marriage. She uses it as a reference point more than once and seemingly laced with love.

A second lacuna is a story she tells of a mysterious male friend of her mother. He was unknown to Sarah or her father. She tracks him down after her mother’s death but there is no insight into his role in their lives. It niggles at the reader why she mentions him, and though Sarah dismisses the notion he might have been her mother’s lover the reader is never quite certain. Sarah includes the story in the book for some reason. Why and what does she learn?

Another problem with Jerusalem Drawn and Quartered are the consensual sex scenes. They feel gratuitous. Perhaps the editor cajoled the author to include them to make the book racier because sex sells? I have no doubt Sarah had these experiences, but the sex is bath foam to her insights. Two mise-en-scènes are salacious but not organic to the story.

The book includes candid snapshots of the author in various settings. It’s a nice touch reflective of the social media channel on which Sarah is a rising star. They symbolically meld Sarah and the City. The book is not a memoir but an enjoyable telling of personal stories about her life and Jerusalem’s in shared discovery.  Sarah is too young to write a memoir, but no one is too young or old to read her breakout- engrossing book. Keep writing like this and she better get fond of celebrity status.

Dr. Goldmeier received the Governor’s Award (Illinois) for family investment programs in the workplace from the Com. on the Status of Women. He was a Research and Teaching Fellow at Harvard earning a doctorate. His first book is HEALTHCARE INSIGHTS: BETTER CARE BETTER BUSINESS

He worked in the administrations of four Governors. Currently, Harold is Managing Partner of an investment firm, a consultant to firms in commerce and industry, writer, and public speaker on public policy issues.

Harold is a writer for GreenPoint Global and Seeking Alpha both international firms specializing in topics about healthcare & medicine, business management & investment, marketing & culture, and the publishing industry.

His articles and book reviews appear in Scholars for Peace in the Middle East, The Jerusalem Post, Seeking Alpha financial website, Life in Israel, Arutz Sheva, Times of Israel, and US GreenTechnologies. Harold contributed a series of articles in the Gale Business Insights Handbook of Investment Research.