Urban Outfitters bends to the will of the Jews on Keffiyeh… 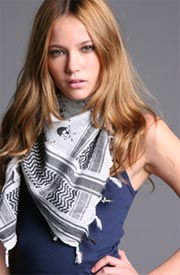 You might recall the big kerfuffle last week where a number of bloggers (well Mobius really, and a Stand With Us exec speaking for herself) took umbrage with Urban Outfitters over their sale of “anti-war woven scarves.” These peace scarves were in fact Keffiyehs, otherwise benign traditional Arab headdresses which achieved notoriety because they were also worn by bad ass insurgents in Iraq and Palestinian terrorists. Keffiyehs have also been worn by anti-Israel, anti-imperialist activists for years and of late by fashionistas and hipsters wishing to give their wardrobes instant street cred. Some activists feel that the adoption of the Keffiyah as a fashion statement trivializes its meaning, to whit here’s a typical whiny statement from Nadeem at Kabobfest:

I (and others) have noticed it [the Keffiyeh] being worn by seemingly clueless d-bags who know little more about the scarf than its pretty patterns â€“ the more disgusted I’ve become with the idea of people expropriating aspects of my culture… especially when they strip those things of all meaning.

Curiously, when Urban Outfitters later announced that they would no longer be selling the scarves, Kabobfest blamed “Zionuts” like Abe Foxman, fearful of the growing strength of American solidarity with Palestinians. So which is it Nadeem? Douchebags? Or brothers and sisters in solidarity? I suspect it’s a bit of both… but I digress.

It seems that fashionistas looking for a Keffiyeh need not worry! Urban Outfitters is still selling them on their European Web site. While they are not marketing them as anti-war scarves (what the hell is a shemagh?) one of the scarves, adorned with a skull and cross-bones motif oddly reminiscent of the Nazi’s SS Death Head symbol is called the Skull Desert Scarf. 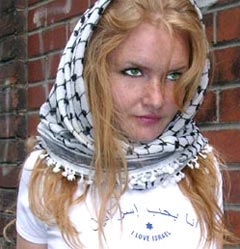 What a really unfortunate juxtaposition. I mean really unfortunate, especially when you consider How Hamas and Hezballah have this affinity for oddly Nazi-like salutes AND Keffiyehs… Urban Outfitters CEO Dick Heyne might need to clean up shop a little. So what now? Do we send Dick an angry letter? Do I get on the ADL hotline and spring Abe Foxman on these guys? Do I buy a big batch of these Keffiyehs and set up shop in Gaza (Israel just released $100 million into Mahmoud Abbas’s account. Those guys now have mad money to spend!)? Or do I revel in the continued trivialization of the Palestinian movement?

Aw man… it’s just a fucking scarf… Heck, we’ve used Keffiyehs to market our I Love Israel in Arabic t-shirts. British and US soldiers in Iraq use Keffiyehs to keep dust off their faces… but not with a death’s head design embroidered on them. That might be a bit too much. I mean, we’re not talking an “Everyone Loves a Jewish Girl” t-shirt here – we’re talking about what can be construed as an “I want to kill you and your family and all your people” scarf. Get on it Urban Outfitters!