Hitler Restaurant to be Renamed 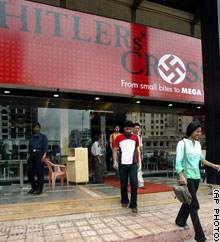 Bowing to protests from India’s tiny Jewish community, diplomats from Israel and Germany, and outraged people of good taste around the world, the owner’s Mumbai’s Hitler’s Cross Restaurant have agreed to rename their restaurant.

“We acknowledge that the name adopted by us for our restaurant was most inappropriate,” Satish Sabhlok, one of the owners of the multi-cuisine restaurant, said in a statement… Our intention was not to glorify Hitler or his atrocities or ideology in any way and we regret the anguish caused by the use of this name.”

While the owners have yet to decide on a new name for their eatery, allow us to suggest that they not use the following: