In the past year, Jewlicious has recorded 1262 visits from what Google calls the Palestinian Territories. What sort of insight might we be able to gain from this informal interaction? Well, it seems the vast majority of the traffic, 84% of it, came from search engine results. The top keywords were as follows: 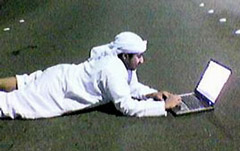 Other notable keywords were: address sex home in tel aviv, balestine gay (not a typo), gay arab shoes, gay nazis pic, homophobia palestine, natalie portman zionist, sex children egy 15year photo (??? I don’t want to know…), shakshuka recipe and of course miri eisin. The rest of the Arab world evinces similar themes – Egypt, with 8,664 visits has israeli girls, israeli babes and hot israeli girls as top key words (shakshuka is in there too). The United Arab Emirates with 8,023 visitors has Israeli girls, Israeli babes and Jewish babes as their top key words. Israel, with 398,342 visitors in the past year had jewlicious, israeli babes and shakshuka as it’s top three keywords.

Look, one tends to get overwhelmed by everything here in Jerusalem. Political machinations and intrigue can get so infuriating that you learn to tune it out as a survival mechanism. Me? I’m just some guy on a lap top in Jerusalem – I wouldn’t even call myself a pundit. I really don’t know much about anything, but I do know how to read Web stats. I also know I’d love to live in peace. I don’t know how that’s going to happen, but if I may give a tip to everyone attending that peace summit in Annapolis, it’s this: If there is ever to be a just and lasting peace in the middle east, I sense that it’ll somehow involve hot babes and shakshuka.

Do with that what you will.

Related ItemsArabsJewliciousPalestiniansPeace
← Previous Story Not So Jewlicious
Next Story → Esther Goes to Nashville: The Next Generation Plenary