Stupidest Idea Ever: 5 Million of them in fact… 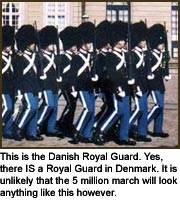 I can’t fault these Danes for their good intentions and all, but talk about NAIVE. Lebanon’s Daily Star has a detailed and interesting article about an exhibition that is going on now at Beirut’s Espace SD (Stupid Dumbass?) Gallery, by the Danes behind the 5 million Peace March. This march will take place some time in July 2005, and, well… here’s what their Web site has to say:

The march will have two major gathering locations:
1) The borders to Israel of Egypt, Lebanon, Jordan and Syria. Peace activists will arrive around the 1st of July 2005 and simply march peacefully towards the open city of Jerusalem. In Jerusalem they will stay for two days, leaving it to the international community to administrate it as a free city open for all.
2) Within the city of Jerusalem. Local peace activist will come marching from all over the local neighbouring towns and cities.

So the plan is to get 5 million equally clueless individuals to gather at Israeli-Arab border crossings and then simply march into Jerusalem. Right. I think these guys should stick to Danish butter cookies. Either that or they should lay off of the breakfast muffins from Christiania. Whatever… should be interesting though. Heck, I signed up! I’m number 112. Let’s see now, only 4,999,888 to go!