He’s got everything he needs, he’s an artist, he don’t look back 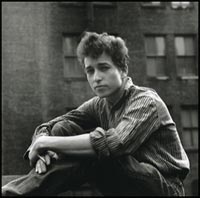 If you happen to be in his hometown of Hibbing on Tuesday, head over to the Bob’s Birthday Barbecue at Salvation Army parking lot. That’s gonna be one rocking time. While you’re there be sure to drive down the newly named Dylan Drive.

Bob is one of my great-movers-and-shakers-of-history crushes, right up there with Theodore Herzl, and arguably the most compelling Jew boy of the 20th century. All of his albums are in popular circulation in the soundtrack of my life and a source of endless fun and inspiration. His words render me humbled, and no praise or pose that I would be capable of composing would give him the credit due for his influence in my life alone (though sometimes I am moved to try anyway).

I’ll give it another shot for Shabtai Zisel ben Avraham v’Rachel Riva, a.k.a Bob Dylan’s Hebrew Birthday on the 27th of Iyar, next week. (Anyone else note the irony that he’s named after a false messiah?)