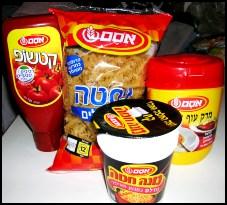 You thought Osem just made those little soup almonds? You’re wrong. Osem has a hand in everything from instant coffee to couscous. Osem probably legally has a controlling interest in your shul, your JCC and your children. If Palestinian terror groups were smart, instead of attacking buses which brings the wrath of the IDF down on their heads, they would simultaneously hit every Osem facility in Israel. Left without Bamba, soup almonds, Nok Out bars, chicken soup stock, cup noodles and bagged ravioli, Israel would crumple in a week (fortunately for us, Palestinian terrorists tend to be dumb as cactus – although hopefully none of them are reading Jewlicious).

Seriously, though, Osem is a great company whose ubiquity in both Israel and kosher markets around the Diaspora isn’t a bad thing, because their products are actually pretty good (and I’m not even getting paid to say that, though I am open to the idea if any Osem execs are reading this). Being someone who keeps kosher, I live on their bagged food products at school and wind up eating better than anybody I know who eats at that skankhole cafeteria. So without further ado, here are some facts about Israel’s biggest food company:

– Osem began in 1942 as a collective of seven businessmen’s various noodle factories in Israel.
– The name comes from the Yom Kippur prayer for plenty.
– Osem provided jobs for thousands of new immigrants in the difficult years of the 1950s, probably leading many Sephardim to question how they had gone from being artisans or merchants or doctors or rabbis in the old country to standing on an assembly line stamping out spaghetti in the Holy Land.
– The first Osem factory is in Bnei Brak; others are in Holon, Petach Tikva, Sderot and Yokneam.
– Bamba, the vitamin-fortified Cheeto-ish addictive-like-crack peanut butter puff snack, was introduced in 1964
– NestlÃ©, the Swiss super company, owns 50.1 percent of Osem
– Osem products are available in the UK, the US, France, Belgium, Holland, Italy, Germany, Switzerland, Austria, Scandinavia, Spain, Greece, Hungary, Russia, Ukraine, Brazil, Argentina, Mexico, Canada, South Africa, Thailand, Hong Kong, Australia and New Zealand
– In addition to Osem-labelled products in Israel and the US, Osem owns or distributes Sabra Salads (makers of the only decent storebought hummus in America), Tivol (fake-meat products produced in Kibbutz Lochamei ha-Geta’ot), Of Tov chicken, Beit Hashitah pickles, Nestle ice cream and Purina dog food.
– Some Israeli guy with too much time on his hands has reviewed a bunch of Osem snacks. Trust me – the falafel Bissli really does taste eerily like falafel.

So next time you see the Osem logo in your home or at the market, remember: they own your Jewish ass, so buy a bag of Bamba. It’s vitamin-fortified.