The Ali G of Judaism 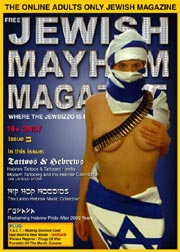 Mr. Andrews’s interest in preserving Jewish culture — albeit in an unorthodox way — says he derives from his experiences living in Israel and growing up around St. Clair Avenue and Dufferin Street, and King Street and Spadina Avenue … “Living as a Jew downtown rather than the cushy suburbs made me a little tougher. . . . I was constantly reminded that I was a Jew. Sometimes I’d even wear a kippa to provoke the high-school bullies.

Someone has got be to be kidding me … I mean the title of the article, “The Ali G of Judaism” is ridiculous. Ali G is already the Ali G of Judaism. Given that he’s, you know, Jewish and all. Speaking of Ali G, he’s engaged to Australian actress, Isla Fisher. Isla, a gorgeous red head who is starring in The Wedding Crashers (with esther apparently), is already studying about Judaism to prepare herself for a possible Jewish wedding ceremony.

Yes I’ve been learning all about Judaism. I was never brought up with any particular faith so it’s fascinating to find out what Sacha believes in. I’m constantly asking him questions about it because it’s really beautiful and complex. It’s so interesting to find out what lies beneath the Jewish afro.

This has clearly been a slow, slow news day. Forgive me.