A .44 full of bullets, Face Full of Pale, Eyes full of empty, A Stare Full of Nails

A while back, Quebecers exploited a whole in the democratic system of Canada: they created a party devoted to separating Quebec from Canada. Arguments about legality, ethics and politics came fast and furious: should traitors be allowed to be voted for? Are there limits to what you can vote for? In the end, as usual, Canadians sat back, watched Quebec lose their traditional king-maker position (since they always vote as a block and have a lot of seats to vote for) suffered another failed referendum and now life goes on.

The analogy is very imperfect, but the PA seems to find themselves in an slightly similar position. On the one hand, they would clearly benefit from non participation by Hamas in the upcoming elections. However, preventing them from running would look like bowing down to the Evil Zionist Regime (EZR). The EZR, for their part, has been pressuring the PA not to let Hamas run, citing a clause in the Israeli-Palestinian interim agreement from 1995:

[Entities may not run in elections]if such candidates, parties, or coalitions commit or advocate racism or pursue the implementation of their aims by unlawful or nondemocratic means.

Apparently, the EZR doesn’t recognize terrorism as a lawful or democratic means of pursuing an aim (namely, destroying the EZR). The PA, then, presumably to look tough, told the EZR to back off. Erekat told Peres:

Don’t interfere with our elections…Leave it to us.

Why should we leave it to them?

Any intervention of yours only strengthens Hamas. You believe you are weakening it, but the result is the opposite.

Ah, Muffti sees. In order to weaken Hamas, we let them run. The PA comes off looking good since they stood up to the EZR. Hamas, who are more exprienced in the role of angry victim providing social care and terror in an occupied state now have to play ‘fair’ and run in elections. Not surprisingly, the ‘leave it to us’ talk correlates with a recent announcement by the PA, their forces stopped 17 terror attacks. They also found 75 explosives, confiscated 15 Qassam rockets and halted seven attempts to smuggle goods across the Egyptian border. But, in light of recent attacks, one is tempted to react to the announcement much like Bill White’s girlfriend when she first got in his pants: Not Impressed.

Confused? You should be. Everyone faces a careful balancing act: the PA has to look tough on Hamas, but tough to the EZR as well. However, they can’t look tough: Hamas enjoys a great deal of support The EZR has to be tough towards the PA on their handling of terror, but not too tough so as to ruin their chances in the election. Hamas seems to be the winner. They’ve been politely asked not to carry arms in public but otherwise left alone. They have their rivals in the PA, who they occasionaly take shots at, defending their right to run. 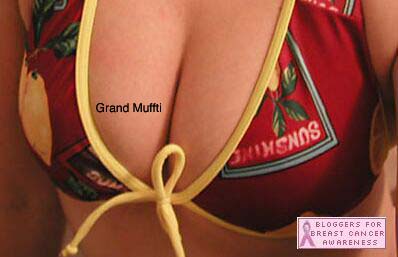