Agorot: Key to the Zionist Plot.

There are several, ahem, “proofs” for this. First off, it does indeed say in Genesis, “To your descendants I give this land from the River of Egypt to the Great River, the river Euphrates.” However, it is generally understood in Biblical commentary, including that of Rashi, that the River of Egypt is the Wadi El-Arish in Sinai. Furthermore, later descriptions of the Land of Israel in the Bible describe something much more limited, and descriptive passages trump general ones. And, of course, it’s not like the Zionists ever used the Torah as a blueprint for the construction of a Jewish state.

Second, it is claimed that the blue stripes on the Israeli flag prove this Sinister Zionist plot. Maybe you thought they represented the blue stripes on a tallit, meant to remind Jews of the Temple, but you’re wrong. They clearly symbolize the Nile and the Euphrates, with the Jews between them.

Third, Yassir Arafat, and several other heads of state, have it on good authority that over the entry to the Knesset there is a map of Greater Israel with the phrase “From the Nile to the Euphrates” on it. Curiously, no MK, including Arab MKs, have ever corroborated this report, but they must be in on the Sinister Zionist Plot.

On Friday night, however, I think I discovered my favorite proof. I was having dinner at my friend Mayer’s house, and he had two friends of his over, a German and an American studying at Bir Zeit University in Ramallah. Post-dinner, over a couple rounds of really quite excellent Ramallan arak, we got to discussing politics. Somewhere in there, one of the Bir Zeit guys told us that some of his Palestinian acquaintances had dramatically revealed to him the ultimate proof to Israel’s expansionism: the 10-agorah coin. 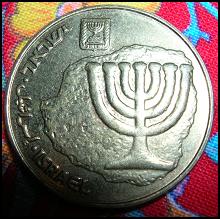 Admittedly, agorot are evil. They’re huge, take up undue pocket space, and are breathtakingly worthless. That, however, is incidental; the key is that amorphous blob under the menorah, which to any normal person appears to be the medium the menorah is carved out of. However, to abnormal people, and by that I mean people who are wholly convinced 13 million people who can’t even agree with each other are steadily taking over the world, that amorphous blob is a map of Israel from the Nile to the Euphrates.

Nevermind that it doesn’t look anything like it! The Zionists are wily. One day they’re putting the blood of your children into matzah, the next they’re sweeping from Cairo to Baghdad. Thank God that someone got wise to their scheme.