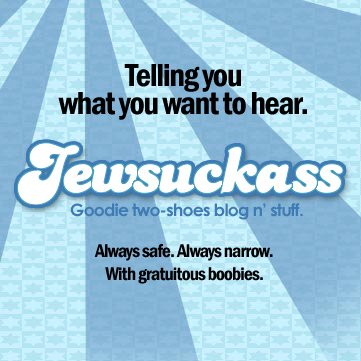 …but it beats being ignored!

So there I was perusing Jewschool, when I came across this post about a big Jewschool meetup on the EL-EE-ESS (that’s Lower East Side for you provincial bumpkins from uh… midtown. Suckahs!). The post was, well, kind of, you know, banal and the accompanying pics (see an example below) were not so evocative of a fun time being had by all. Folks look like they’re asleep! I mean look, I am sure the meeting, which discussed the future direction of Jewschool, was very important and all that. But when you have pics as uninspiring as these, it’s probably best to pass on posting them. And please let me know if I am being unreasonable. 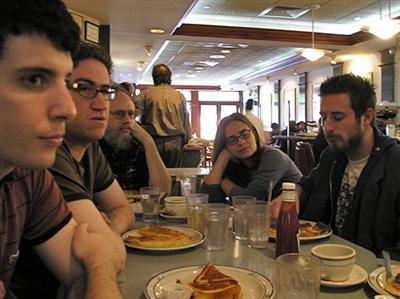 Grand Muffti wrote the first comment on the post and made pretty much the same comment I did. He preceded his comments with praise I guess to soften the blow, so clearly there wasn’t anything mean spirited involved. However, somebody took umbrage! Mobius, the lovable scamp that runs Jewschool, called us pretentious. Some other little wuss called “anon” posted a link to the graphic above, which I assume he/she produced. The message was clear – f Jewlicious! F?? Is that for fun? Frolicsome? Fantastic? It couldn’t be… fuck? Fuck Jewlicious? Because our meetings are fun? Because we’re goodie two shoes? And narrow minded? Oh that’s rich! From an anonymous commentor so concerned about maintaining the decorum at Jewschool that he/she dare not use the dreaded f word! Oh and the little coward also has something against gratuitous boobies.

So can a blog written by a Morrocan Jew, a Jerusalemite Olah, a New York writer, a Philosophy PhD atheist, some random middle dude somewhere, and a snarky hurricane katrina refujew, all of whom come from very different religious, social and political backgrounds, can such a thing be narrow? Do we really tell you what you want to hear? Are we in fact, as has been stated before, really irrelevant? Do we alienate young Jews today? Please, by all means, let us know. Let’s show that idiot (the anon commentor) on Jewschool what constructive dialog is really all about. Feel free to make liberal use of the f word. Oh and have a fun Succoth!