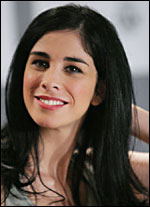 Taking our cue from Heeb Magazine and that Kelsey dude, we’d like to point you to an interesting interview in this week’s New Yorker with everyone’s favorite hot Jewish babe comedian and Heeb Magazine cover girl, Sarah Silverman. The interview touches upon Silverman’s provocative, almost enigmatic brand of comedy, and we are treated to some of her best lines:

â€œHer constructions are minimal but the turn is sharp. â€œI was raped by a doctor,â€ she says. â€œWhich is so bittersweet for a Jewish girl.â€ … Everybody blames the Jews for killing Christ,â€ Silverman says. â€œAnd then the Jews try to pass it off on the Romans. I’m one of the few people that believe it was the blacks.â€ She skewers hypocrisy and self-righteousness, but there are times when her narrative ingredientsâ€”rape, dead grandmothersâ€”threaten to overwhelm the delicate balance of a joke (rape being one of the last remaining taboos in today’s sexual politics; grandmothers being what they are).

The article also touches upon accusations that Silverman’s use of the term chink in a comedy routine on Late Night with Conan O’Brien was racist. Guy Aoki, of the Media Action Network for Asian Americans protested to the Network and debated Silverman on Bill Maher’s Politically Incorrect where Silverman got frustratedâ€”â€œIt’s not a racist joke,â€ she said; â€œit’s a joke about racismâ€â€”and called Aoki a â€œdouche bag.â€ She later added:

I got in trouble for saying the word â€œChinkâ€ on a talk show, a network talk show. It was in the context of a joke. Obviously. That’d be weird. That’d be a really bad career choice if it wasn’t. But, nevertheless, the president of an Asian-American watchdog group out here in Los Angeles, his name is Guy Aoki, and he was up in arms about it and he put my name in the papers calling me a racist, and it hurt. As a Jewâ€”as a member of the Jewish communityâ€”I was really concerned that we were losing control of the media. Right? What kind of a world do we live in where a totally cute white girl can’t say â€œChinkâ€ on network television? It’s like the fifties. It’s scary … There are only two Asian people that I know that I have any problem with, at all. One is, uh, Guy Aoki. The other is my friend Steve, who actually went pee-pee in my Coke. He’s all, â€˜Me Chinese, me play joke.’ Uh, if you have to explain it, Steve, it’s not funny.

Is it any wonder Silverman, who I adore by the way, is the toast of hipster Jews everywhere? She performed at Jewcy’s first fundraiser, wrote a passage in the new Bar Mitzvah Disco book and graces the cover of Heeb. Her brand of humor may offend some but only an idiot would think that she’s actually racist. In fact, quite the opposite is true, and that’s the point.

Having said that however, keep in mind that some of the self same Jews that celebrate Sarah Silverman’s cutting edge comedy are very sensitive themselves. Probably as a result of ancestral malnutrition that was a chronic condition in the dinghy eastern European ghettos and shtetls of their forefathers. And all that tay sachs and lactose intolerance running around – the point is, these people have delicate dispositions. So while you are free to buy Heeb and visit various uh… other people’s Web sites, don’t ever make fun of them. They can’t handle it, and then they get all excitable and indignant and you may trigger an asthma attack. Don’t say I didn’t warn you.

Sarah Silverman is currently appearing in the film Jesus is Magic, an adaptation of her stage show. Visit the Web site for theatres and listings!