The political movement for the establishment and maintenance of a Jewish state has gone through many phases and been subject to many interpretations during its 150 or so years. From the Ohavei Tziyon, the Biluites and the World Zionist Congress of the late 1800s to the warring schools of Labor and Revisionist Zionism in the years leading up to the establishment of Israel to the gun-toting religious Zionist hippies of our present day, various groups have claimed to represent the true spirit of the Zionist movement.

Well. Nobody talks about the Ohavei Tziyon or Biluites anymore. Labor Zionism gave us the socialist nightmare of Israeli bureaucracy. Revisionist Zionism has been mostly reduced to a football club. And the religious Zionists have been transformed by the disengagement from the self-styled true heralds of the Zionist way to a bunch of petulant crybabies in obnoxious “Lo Nishkach v’Lo Nislach” (We Won’t Forget and We Won’t Forgive) T-shirts. So then, we need to refresh Zionism. And I have the solution. Forget Labor. Forget Revision. My new movement:

What is Culinary Zionism, you ask? Simple. You get the Jews here, and you keep ’em here with the food, which is totally cheap and totally yummy. And good for you. Seriously, where else can you not only get a host of delicious Middle Eastern treats at low, low prices, and also, due to the immigrant nature of Israeli society, just about any ethnic food you can think of? Do you New York hipster dudes have the shuk? Can you smog-choked LAers go to Abu Ghosh and bliss out on hummus-y goodness? I think not. Hummus! Falafel! Fuul! Shakshuka! Olives! A million and one pastries! Salatim! Great fruit! Fresh vegetables! Who could ask for more? 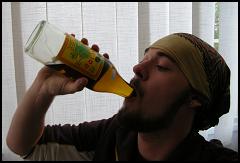 Olive oil is good and good for you. Just ask me.

So come to Israel. Come for all those historical and religious and blah blah blah reasons. Stay for the food.

And with that in mind, now that ck and laya have christened Taami as the best restaurant hummus in Jerusalem, allow me to alert you to the best hummus in Machaneh Yehudah, the shuk. I don’t know what the place is called, but there’s a tall guy with a pony tail, and a tray of divine hummus with fuul, swimming in olive oil, goes for only ten shekels. Above we can see our own princess of Jewliciousness giving it, I guess, one pita up. Seriously. It is so damned good. If you’re in Jerusalem, go out and buy some. Hell, if you’re not in Jerusalem, go out and buy some. It’s the spirit of the new revolution. 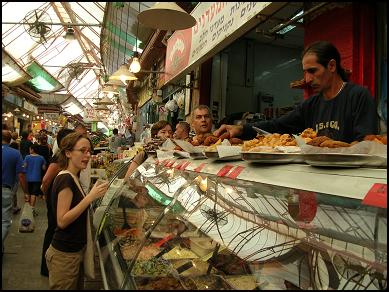 And while you’re at the shuk, stop by Ma’adanei Tzidkiyahu, which I will (loosely) translate as “Tzidkiyahu’s Yummies,” and pick up some great stuffed grape leaves and myriad salatim. Just remember to shove aside the old ladies in line or they will totally budge your ass. It is the Law of the Shuk. 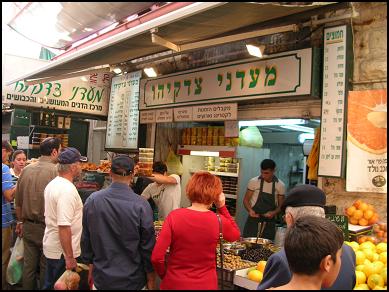 And now, to be very Daily Show about it, here is your Israeli culinary moment of Zen. 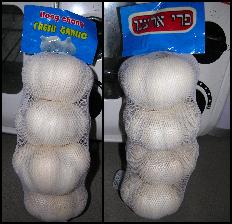 One side of this garlic says “Hong Chang.” The other says, in Hebrew, “Fruit of our land.” Go figure.