The Pussification of the Israeli Man 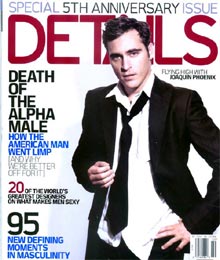 The October issue of Details magazine has an article in it by Jeff Gordiner titled The Pussification of the American Man. The byline on the cover reads How The American Man Went Limp, while the rest of the article describes modern heterosexual American men plucking their eyebrows, taking two hours to shave, crying with Oprah, reading Vogue and sleeping on 1000-thread-count sheets.

…male softness is no longer some fluky trend, some temporary lapse into quiche-eating. It’s the norm … We saw the old model of masculine bahvior on September 11 – American men saving people, fighting fires, getting their hands dirty, clearing rubble, dying in the line of duty – and it came as a sharp reminder of just how rarely (i.e., never) most of us do stuff like that. The average 21st-century guy is a quilted man, tucked under a fluffy coverlet surrounded by throw pillows. His world is one of comfort and frippery.

From a Jewlicious perspective, much of this article could easily apply to your average diaspora Jew. There ought not be any surprise there. Who amongst us hasn’t heard Israelis bemoan the softness of their chutz-la-aretz coreligionists? Did not Zionism seek to normalize the image of the weak shtetl Jew?

What is surprising however is how much of this article applies to the average modern Israeli. Yes, I know, Israeli Pussy (to paraphrase Details) is not a term you hear often to describe Israeli men, but if the shoe fits … I mean, I don’t remember the last time I heard an Israeli man make an innappropriate comment to a woman I was walking with. And look at how Israeli men are dressing these days. It is not unusual to see them wearing tight, low slung jeans and belly revealing shirts. Their blonde frosted hair is the product of several different types of “product.” And this in country where a pharmacist once accused a friend of being a “homo” because he wanted to buy conditioner.

Statistics show that fully 30% of secular Israeli men do not serve in the Army, and lack of military service does not confer the stigma it used to. Serving in the army has become the domain of friars – why serve when you can get good job at a hair salon and drink lattÃ©s all day long?

What about Sharon? Read about his military exploits and whether or not you agree with his tactics, you have to admit he was a bad ass. And then there was that whole fiasco in Lebanon where he somewhat unfairly earned the nickname The Butcher of Beirut while otherwise unceremoniously kicking the PLO’s butt off to Tunisia. Now he has granted unprecedented and unilateral territorial concessions to the Palestinians in the hopes that they will finally like us. He recently gave a speech at the UN and basked in the glow of newfound warmth from the other leaders in attendance. Whatever happenned to the Israeli policy of Oom-Shmoom* where no one gave a shit about the UN? How did Israel’s toughest General became such a softie?

It’s not just the architect of the Gaza withdrawal that comes in for such criticism. In the months leading up to the withdrawal date, the settler men sent out their adolescent sons and daughters to lead the protests and tangle with the police. During the withdrawal, I was at first touched and then nauseated by the endless boohoohoo scenes as grown men, either formerly fierce settlers or Israeli soldiers sent to evict them, hugged and cried. I mean cripes you guys, you’re embarassing me!

Gordiner’s article seems to promote the notion that this “pussification” is good. It advances the sort of offensive notion that as the Y chromosone becomes less and less influential in men’s lives, brute strength and all the hallmarks of the Alpha Male are being replaced by the “sneaky fucker strategy.” Frankly, that sounds like a load of crap to me. But I have to grudgingly admit that an Israel where a potentially civil-war inducing operation was executed without any casualties, where Ariel Sharon is an internationally respected statesman, where women can walk down the street without being harassed by hormonally challenged men is, I guess, a good thing. Just give me a minute or two to mourn the death of Israeli machismo and get used to this. Maybe I’ll have a good cry and then just move on. It’s probably what Oprah would want me to do.

* Former Israeli PM David Ben Gurion once famously expressed disdain for the United Nations, known in Hebrew as Oom, which he dismissed as Oom shmoom.