Finally, a more neutral symbol for the Red Cross: a red diamond, with the local symbol within the diamond’s borders: 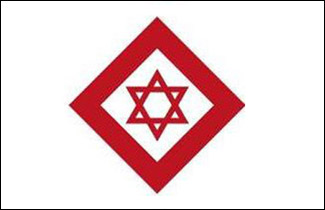 Magen David Adom’s longstanding effort to join the International Red Cross and Red Crescent movements has proceeded in fits and starts, so it should have come as no surprise that the latest attempt to clear the major barrier to entry didn’t go smoothly.

In the end, though, it was a success: Early Thursday morning, Geneva Convention signatory countries adopted a neutral red diamond as an official protective symbol, to go along with the red cross and red crescent.

[…] The MDA will continue to use the red Star of David when operating in Israel. When working abroad, MDA personnel will display the star inside the red diamond.

I’ve heard that in Ireland, they will use green marshmallow clovers.

Jewish groups welcomed adoption of the red diamond and hoped that the development would lead to the MDA’s full membership in the international organization.

A spokesman for U.N. Secretary-General Kofi Annan said Annan was â€œdelightedâ€ by the decision and â€œhopes in particular that it will open the way for societies that are not yet formally part of the movement, such as the Israeli Magen David Adom, to be admitted as full members.â€

Here’s hoping. Also, here’s hoping that Lucky Charms begins using kosher gelatin in its marshmallows. Cause man, did I want that cereal when I was a kid.