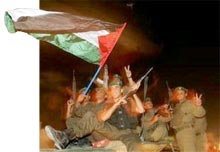 EU observers flee in fear!
The Rafah crossing, between Gaza and Egypt has been effectively shut down. Not by Israeli forces, but by Palestinian police angered at unchecked lawlessness in the areas administered by the Palestine Authority. See, a couple of days ago some stuff went down between the Police and an angry family:

On Thursday, the Palestinian police officer and a civilian were killed in a shootout that erupted between two rival families. The violence began when a member of one of the families was detained by police. The man’s relatives came to a local police station to free him, and clashes broke out.

Yeah. Even families have militias that are stronger than the Police. Anyhow, about 100 Palestinian policemen stormed the Raffah crossing and shut it down, demanding the execution of the gunman who killed their colleague. They vow to keep the crossing closed until justice is served.

Except aren’t they the guys that are supposed to do that? Who exactly is in charge in Gaza? Oh, and for the record, the suicide bomber who killed Lieutenant Ori Binamo yesterday had another gig. When he wasn’t busy blowing himself up, he worked as… a Palestinian policeman. Yup.

These Policemen are fierce and resolute. Expect them out of the crossing by lunch time.