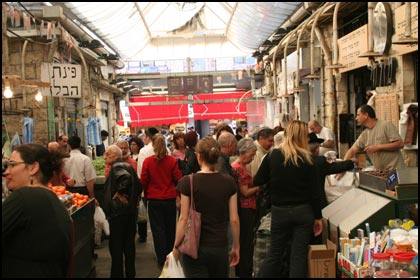 Shabat Shalom all y’all! The Machane Yehudah market is both the best and the worst place to be on a Friday afternoon before Shabat. Best because it’s Jerusalem’s top source for the freshest produce at the very best prices. Worst because, well, it’s a zoo full of merchants yelling at the top of their lungs, and all manner of Israelis jostling about, getting their last minute shopping done. And these are people on a mission – talk about aggressive! Don’t be fooled by that little granny – get in her way and she will knock you flat on your ass!

Which makes the latest news from the Ukraine that much funnier. The Jerusalem Post reports that the Kiev based Interregional Academy for Personnel Management, known by its Russian acronym MAUP, has called on the UN to “close” Israel. MAUP is the Ukraine’s largest private University with 35,000 students, many of whom are Arabs. It offers degrees in “law, economics, business administration, accounting, political science, practical medicine and psychology and claims to have a network of alumni and supporters in 60 countries.” MAUP is also the country’s top purveyor of anti-Semitic literature, publishing both Mein Kampf and The Protocols of the Elders of Zion. The school has also bestowed honorary titles and degrees on some internationally renowned hate-mongers, including US white supremacist David Duke, who has a doctorate in history from MAUP and has participated in a number of MAUP-organized anti-Zionist conferences in Kiev.

“Mankind lived without the State of Israel exactly 2,670 years, but after the second of its creation all the world feels a constant aggression of the old ‘sons of the devil,’ ” according to a university statement, published last month in the school newspaper, supporting Iranian President Mahmoud Ahmadinejad’s recent call to destroy Israel.

All that book learnin’ and yet these people, who receive substantial funding from both Iran and Saudi Arabia, are dumb as nails. Spend 5 minutes in Machaneh Yehudah and you’ll know you can’t just shut Israel down. That old lady will kick your ass just for delaying her for 3 seconds. Imagine what she’ll do to you if you try to take her country away. Imagine what her stronger, younger, well armed grandchildren will do. Think about that Ukranian MAUP dudes next time you stuff your fat anti-Semitic ass with pierogis.