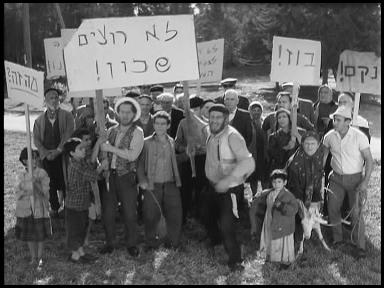 UPDATE: Jewlicious commentor Jessi has recorded the song “Mashiach Ha-Zaken” that Sallah sings in the ma’abarah’s bar in the movie! You can listen to it here. Lyrics and translation here. Thanks Jessi!

Ephraim Kishon is a man after my own heart – a bit of a misfit who immigrated to Israel as a young man, discovered that he didn’t entirely fit in there either, and thus made a career out of gleefully toppling every single sacred cow he could find. Of course, beyond that the similarities are limited. I’m a cranky little bastard who writes for a blog, whereas Kishon survived a number of concentration camps and managed to flee while being transported to Sobibor, then disguised himself as a Slovakian to weather out the war, and made aliyah as Communism took over his native Hungary – and after all that, learned Hebrew and became one of Israel’s most beloved writers, playwrights and directors. I have a ways to go.

As a director, it’s something of a toss-up which of Kishon’s films is his most beloved in Israel. Is it Sallah Shabati or Ha-Shoter Azoulai (which I’m sure I’ll get to)? Both are excellent movies, but given my love for a ripping good satire, I’m going to have to side with Sallah, seeing as Azoulai is less satire and more character study.

Sallah Shabati is a landmark in Israeli film history because, coming out in 1964, it is perhaps the first major skewering of the ideology of Labor Zionism and the kibbutz movement (although unlike skewerings to come, it wasn’t at all mean-spirited). And Kishon doesn’t stop himself at the kibbutzim; essentially everything in Israeli society in the mid-1950s, when the movie takes place, is a target: petty bureaucracy, Israeli democracy, the ma’abarot, the Jewish National Fund, American Jewish donors and tourists, Yekkes, sabras, Ashkenazim and, in what would later become politically incorrect, the Mizrachi immigrants the story is built around.

The eponymous main character comes in the long-established tradition of main characters in satires – the wise idiot who, through either his wisdom or his idiocy (it’s never entirely clear) turns the established system onto its head in order to get what he wants. Sallah, played by Chaim Topol, who would later rocket to fame as Tevye in the film adaptation of Fiddler on the Roof, comes to Israel from an unnamed Arab country with the family in tow – in a series of jokes that would most likely (and wrongly) in today’s political climate be branded as racist and offensive, he’s unsure exactly how many children he has (“How many children do you have?” asks an official. “Six.” “It says here seven.” “Alright, seven.”) and he’s not entirely sure as to the identity of the little old woman who has come with the family (“Is she a relative of yours?” “Don’t know. Maybe she’s our relative. Otherwise why would she have come with us all the way from outside Israel to here? A relative.” “Who understands you people?”).

Considered for himself, Sallah is perhaps not an admirable character – he’s lazy, he’s a drunk, he’s a gambler who brings his sheshbesh board to the synagogue, his parenting style could charitably be described as “hands-off,” his attitude towards his wife ranges from “dismissive” to “insulting,” he generally ignores his female children, he on principle refuses to talk to women, and he’s perfectly willing to sell off his eldest daughter to the highest bidder. And yet, he may be the most lovable character in Israeli cinematic history. 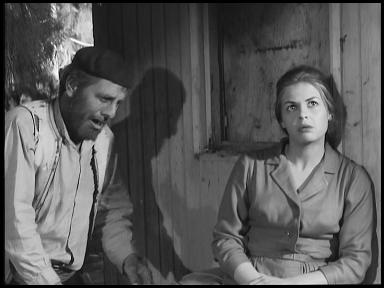 The plot concerns itself with Sallah trying to find work (he’s a cobbler who has never made a shoe in his life) and trying to get his family out of their leaky shack in the ma’abarah (immigrant transit camp) into a new housing project the government has built within sight of the ma’abarah and keeps empty with a system of bureaucratic entrapments. Meanwhile, the neighboring kibbutzniks decide to “adopt” the ma’abarah in order to civilize its “primitive” residents, sending the easily flustered Batsheva as a social worker and psychoanalyst (who winds up getting in turn psychoanalyzed by Sallah) and having the dashing Ziggy (played by a very young Arik Einstein) teach the immigrants how to plant trees for the JNF’s forests, which have a constantly rotating array of signs declaring in which rich American donor’s name the forest is planted (they switch out the signs as each donor visits).

The kibbutzniks bear the brunt of the satire – a classic scene at the beginning of the movie has the local driver attempting to explain to Sallah the concept of collective property as a kibbutz tractor blocks their path.

Israeli democracy gets it too – Sallah, who the politicians assume is the big man in the ma’abarah, cuts a deal with all the parties in return for ensuring the ma’abarah’s votes, whereupon he attempts to vote multiple times for every single party. And of course, it wouldn’t be a classic Israeli movie without the interethnic love stories – and this movie is so good, it has two. Sallah’s eldest daughter Habuba falls for Ziggy, whereas Batsheva falls for Sallah’s son Shimon. I won’t reveal the denouement, but let’s just say through a series of marital machinations, 800 liras change hands multiple times. 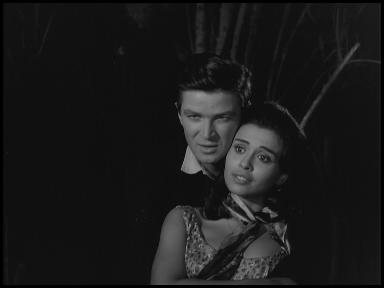 “Ziggy, buy me from daddy.” Ziggy and Habuba.

Sallah Shabati actually may deal with Israel’s Ashkenazi/Sephardi ethnic strife in the most mature, realistic way of any movie to date. It shows the condescending attitude of the Ashkenazi societal elites towards the “primitive” Mizrachim, but it also touches on a fact often ignored in the field of Israeli ethnic relations – the racism often went both ways. When Habuba interrupts Sallah and the ma’abarah’s token Ashkenazi Mr. Goldstein in a game of sheshbesh so she can ask for permission to marry Ziggy, Sallah flies off the handle: “Ziggy…that’s an Ashkenazi name, isn’t it?” “Daddy, Mr. Goldstein is Ashkenazi.” “They’re good for losing at sheshbesh, NOT FOR MARRYING!” It’s a much franker appraisal of the issue than had come before or since.

But of course, it’s a movie, so it all turns out alright. And does Sallah finally get out of the ma’abarah and into the housing project? Let’s just say that the old Israeli axiom “Tamid meqablim mah she’lo rotzim” – “You always get what you don’t want” turns on a lightbulb for Sallah.

So what are you waiting for? Go out right now and buy this movie. Show it to your friends. Show it to your children. This is Israeli cinema at is very, very best, and a total nostalgia trip for a bygone Israel. Buy it in memory of Ephraim Kishon, who died last year. Just do it. You’ll thank me someday.