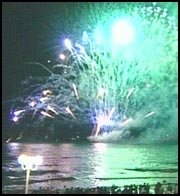 The residents of Tel Aviv were treated to an unprecedented display of pyrotechnics last night as French fireworks masters Groupe F put on a show off the southern section of the Tel Aviv Promenade. The 20 minute display, created at a cost of over $250,000, was purportedly the largest ever undertaken in Israel and was meant to launch an entire series of French cultural offerings in Israel. These include the creation of the French-Israel Foundation, the opening of the new French Institute in Tel Aviv, various shows, exhibitions and other francophilic events. This massive undertaking, which will take place until the end of August, is called Voila! Une Saison culturelle franÃ§aise en IsraÃ«l and the scheduled events can be found on the Web at voila.org.il.

Also available on the site (if you can read French) is a Bref Historique des relations franco-israÃ©liennes, put out by the French consulate in Tel Aviv. Absent from the timeline are any references to ambassador Daniel Bernard’s calling Israel “that shitty little country” or that time Jacques Chirac called Israel a “criminal state” after it blew up Saddam Hussein’s French-built nuclear reactor in Osirak, the whole Mirage-5/Kfir blueprint thing, a history of molly-coddeling terrorists and terrorist regimes, rising anti-Semitism and anti-Semitic violence etc. It’s a big party, why dampen the festivities with, you know, facts …

But whatever, the fireworks sure looked pretty. Since 2003, over 10,000 French immigrants have come to Israel. Now they have something to do other than finding and then applying that stuff onto their hair (no seriously, what IS with French men and hair gel. Wasn’t that over in like the 80s?). Oh another thing I love about French cultural manifestations in Israel are terms like “Djihad islamique,” “Katyoucha” and “kibboutz” in this story about successful Palestinian resistance against Zionist poultry.