This Week in Education 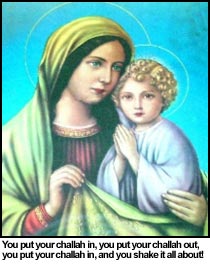 Meet Diane. She knows all the Jewish song standards, thinks Shabbat is exciting, and loves Chanukah and lighting candles. Diane uses her enthusiastic appreciation for Judaism at her job teaching preschool at San Francisco’s Temple Beth Sholom. Another noteworthy thing about Diane is that like many of her colleagues, and indeed many of her young charges, she is not Jewish.

According to 2004 figures from the Coalition for the Advancement of Jewish Education, 15 percent of the more than 122,500 children in Jewish preschools in this country are not Jewish: about 10 percent in Reconstructionist and Conservative preschools, 20 percent in Reform schools, and 44 percent in preschools run by Jewish Community Centers and Ys. Virtually all children in Orthodox preschools are Jewish… This isn’t referring to children of intermarried parents, but to the children of two non-Jewish parents… And many of their teachers aren’t Jewish either: 30 percent in the JCC preschools, 10 percent to 25 percent in Reform schools, and 12 percent to 20 percent in Conservative schools, according to the CAJE figures. The percentage is highest in the western United States, where almost 40 percent of preschool teachers are not Jewish… That sets up an interesting scenario: Plenty of classrooms where non-Jewish teachers are introducing non-Jewish children to Jewish history, values and customs.

Does it matter? Fewer and fewer young Jews are going into education given the crappy pay and benefits. Imagine you’re a guy – what translates into JDate death more than “I’m 32, single, I love long walks on the beach and I teach grade 1.” Good luck gettin’ any buddy. There are demographic issues at play too:

The booming student population of children up to 6 years old has outstripped the supply of qualified teachers, who are less educated and less likely to stay in the field than their predecessors… “Unfortunately,” a recent [Jewish educational nonprofit] JESNA report states, “it has become increasingly difficult to find sufficient numbers of Jewish teachers to teach in those programs.”

The article on the subject by the Baltimore Jewish Times is balanced, well researched and thought provoking. The issues it explores are, of course, almost totally irrelevant to me. In Israel, Jewish education is both mostly free and overwhelmingly Jewish. Education in Israel is so good in fact, that many young Palestinians are deliberately trying to get arrested so that they can go to Israeli jails. They say that it is easier to study for exams in an Israeli prison than it is at home in the West Bank.

Abdul-Rahman said his plan had been to go to prison for up to three years, finishing high school and part of university. In Israeli prisons, study groups are provided that allow Palestinians to sit a variety of exams…. Because prisoners usually receive a stipend of around 1,200 shekels ($250) a month, paid by the Palestinian Authority even if detainees are in Israeli prisons, Abdul-Rahman hoped to emerge with a substantial sum of cash to start his own business…. Since the Hamas movement came to power, stipend payments have been frozen, but that wasn’t about to stop Abdul-Rahman…. “It’s better to spend even your whole life in prison than to be stuck here,” he said. “Here we can’t even have a sandwich.” … Detentions spiked ahead of Palestinian exams in March and are expected to do so again before exams in June.

Maybe what Abdul-Rahman and his buddies should do is move to America… and attend a Reform or Conservative day school. I’m sure they’ll give him a sandwich. And after they graduate and go to college, they can come back and teach kids how to light Chanukah candles!