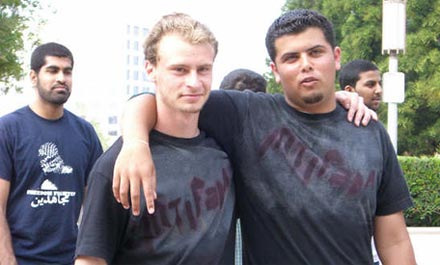 Things were very tense. The 25-foot grey wall with bloody images. Masses of women in hijabs and men in Islamic dress, or t-shirts reading â€œIntifadaâ€ and â€œFree Palestine.â€ They handed out flyers claiming Israel is committing genocide and using the holocaust to justify it. They starred in anger at the Jews. I went around offering pie and a smile, and was rebuffed by each and every one. It was good pie, boysenberry, and everyone who tried it loved it. But I couldn’t get any of the Muslims to try the pie. They said they would ask â€œtheirâ€ Rabbi if it was kosher.

We also handed out balloons. We made lots of friends with the pie and cokes. People were stopping by the tent and bringing friends for the pie. I served E-dud Olmert’s brother Yossi some pie, and he asked if it was kosher. He told some jokes about coalitions. He loved the pie. Yossi was there for a counter speech sponsored by Hillel and Stand With Us. They maxed out the room, and the police closed it off for fire regulations. The police presence kept everything â€œcivilâ€. Twenty uniformed and another dozen plainclothes policeman were on hand to maintain the â€œpeaceâ€ yesterday for Neturei Karta. They showed up fashionably late by half an hour, and proceeded with their mantra that Zionism has hijacked Judaism, that every major Rabbi supports them, that Israel should be abolished and the land controlled by the Muslims. The audience of some 150 people applauded him. Protestors with signs such as â€œSuicide Bombing is Mass Murderâ€ from StandWithUs stood in a line across from the speakers.

At one point during the afternoon after the speech, as the NK guys walked around campus, a Muslim woman shouted at the them â€œgo back to your countryâ€, and then was told to be quiet, â€œthey are on our side,â€ their co-patriots responded.

Its clear from the Talmud that we can learn a lot about people from the company they keep. WHo was NK hanging out with, chillin with? Guys with Hamas arm-bands, Intifada t-shirts, seriously off-the-charts Jew hatred, and NK were having a great time with them, smiling and laughing. They were walking all around having a great time.

The NK guy kept trying to insult me with stupid put downs. I was asking how were the Jews in Iran and did he visit them on his recent trip? The second NK guy wouldn’t tell me his name only that he was from Williamsburg. He chained smoked his Marlboros down to the filter. I nicknamed him Mr. Thank-gut. We handed out two cases of pies and hundreds of baloons in two hours. Even after the event, couldn’t get any of the administration or the police or the Muslims to try any of the kosher pie we were serving. One woman came by and asked if there was â€œPalestinian blood in the pie.â€

â€œNo,â€ I replied, â€œwe were all out so we used Christian blood [sic.]â€ She sneered, â€œyou would use anything you could wouldn’t you Zionists.â€ Then marched off.