Jews on the Fringe: “Danny Boy” 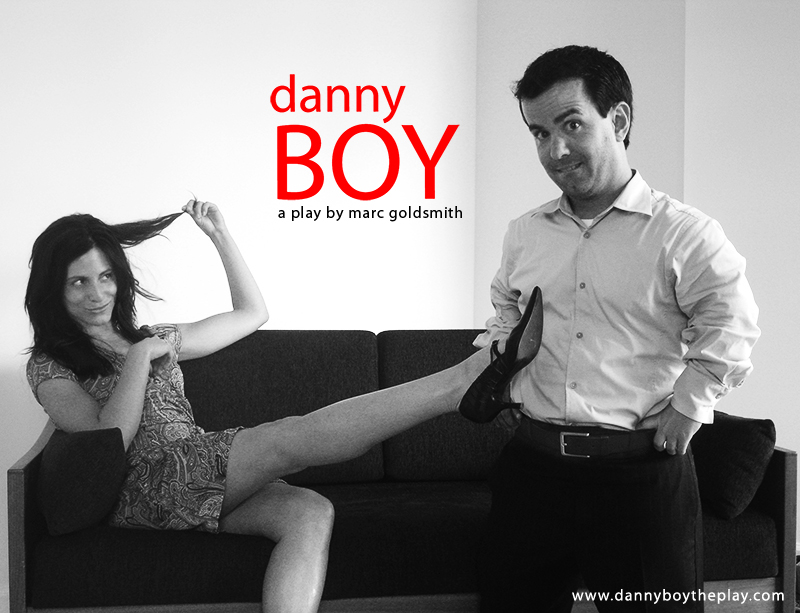 Those of you in the NYC area and in the cultural know might know about this little festival going on this week called The Fringe Festival…it’s an amalgam of the oddest theater you’ll ever hope to see in New York City, until the next Fringe Festival the following year. The Festival is where you’ll find shows with titles like “Aspiration: Housewife,” “Corleone: The Shakespearean Godfather,” and “The Israeli-Palestinian Conflict: A Romantic Comedy.” (Here’s the program synopsis of that last one: “A musical comedy that tracks the notorious mid-East conflict back to a botched one-night stad at the Geneva Convention. Totally embarrassing treaty-sex leads to international chaos, but the question remains, did Palestine and Israel actually find LOVE?”)

Every year there are a few shows that manage to break out of the “fringe” and tentatively step toward Broadway (Urinetown is one of the ones that made it). I’m hoping that this year, one of those shows will be “Danny Boy,” written by Marc Goldsmith, a lawyer-turned-playwright (funny how those lawyers don’t seem to stay lawyers…) friend of mine.

“Danny Boy” tells a story with themes you’re used to: dating in NYC, an overbearing Jewish mother, being frustrated with your career, feeling like you don’t belong, girlfriends getting tired of boyfriends’ slacker lifestyle, and wanting someone to like you for who you are and see how special you are. However, the play’s protagonist is short. Not “JDate short”; he’s actually a little person. Or as the synopsis tells us:

Like any single, thirty-something New Yorker, Danny Bloch is looking for romance. But his search is complicated by his stature–he stands about four-feet tall. The play takes us through Danny’s collisions and conciliations with friends, family, lovers and body issues on his funny and poignant quest for love and self-esteem.

Fringe Festival plays are notoriously erratic when it comes to quality, of both writing and acting. Sometimes, it’s the weirdness of the play that’s its most saleable and salacious attribute. And anyone who’s ever been asked by a friend to attend their art gallery show, their staged production, or their book signing knows the pressure that accompanies their acceptance: we all accept because we love and support our friends, and then we pray…”please Gd, let it not suck…”

Danny Boy goes beyond the “not sucking” level; it’s everything that the blurb promises and more. The first surprise is that the acting is more than good. It’s spot-on. Never for a moment did I feel that the dialogue was heavy or that the actors were performing…instead, they embodied the roles as contemporary archetypes, people we recognize from our own lives and who we both love and hate.

Thematically, the play also deals with issues that are shockingly the same whether you’re four or six feet tall. When Danny tells about kids making fun of him in school, you understand, because you’ve been there. Maybe not to the same level, or for the same exact thing, but you remember that kids are cruel to anyone, and they don’t need a reason other than any perception that that anyone is different. It discusses the issue of compatibility and how much it exists as an excuse for getting involved with other people for whatever reason. It addresses the politics of beauty, the superficiality of human beings, wanting to be understood and loved, and the multiple layers of male insecurity. The play even addresses that most unspeakable of truths about dating: that sometimes we want what we want because we know that it is what other people want.

Dating lends more than its share of funny stories and awkward/hilarious situations. But it’s hard to be single, no matter who you are, the play says. And you nod, and whisper, “Amen.”