True Life on MTV is an award-winning documentary series that tells the stories of young people and the unusual subcultures they inhabit.

Whether documenting the lives of gay marriage activists, individuals dealing with obesity, or teens in high school — the True Life series tells its stories solely from the varied voices and points-of-view of its characters…

As can be expected, True Life is always looking for unusual content. The Web site states that “True Life is looking for sibling rivals, people moving to Las Vegas, meth addicts and people suffering from Tourettes Syndrome [sic.]…”

There are other unusual subcultures MTV is interested in too. According to the Jewish Outreach Institute’s blog,

an upcoming episode of MTV’s documentary series â€œTrue Lifeâ€ will focus on interfaith relationships in general, and we were contacted to help them find an appropriate representation of a Jewish interfaith couple.

Said Jewish interfaith couple ought to appear appear between the ages of 18-28 and should want to share the challenges and benefits of being in an interfaith relationship. 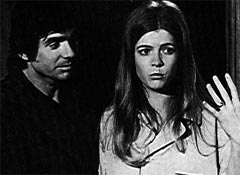 Uh… hello? Jewish interfaith couples are an “unusual subculture?” That’s so funny it makes me want to cry. The fact is, that in the good old U.S. of A., if a Jewish man marries a Jewish woman, they’re the exception rather than the rule. This sort of thing hasn’t been unusual since the 1973 cancellation of the CBS sitcom Bridget Loves Bernie where

Wealthy white-bread Bridget Fitzgerald and lower-class cabdriver Bernie Steinberg meet, fall in love and marry. Even though their love for each other is never in doubt, both are constantly forced to deal with their parents, who are uncomfortable with their kids’ differences in social status and religion.

Starring real-life interfaith couple David Birney and Meredith Baxter, this was groundbreaking in the early 70’s and CBS had to cancel the show after one season because they were tired of the constant protests and hate mail. Now it’s so common, it’s become banal. Now, rather than flood the producers with letters of complaint, Jews and Jewish organizations will instead try to think of ways to make the non-Jewish partner feel more included – Meredith visits the interfaith mikveh for a non-denominational, pre-snogging, Judaic “baptism” ritual officiated by the local Animist Rabbi …

I can see the True Life episode now, full of hackneyed but heartwarming tales of love conquering cultural and religious differences, saccharine scenes of the happy family celebrating Chrismukah, relived experiences wherein the non-Jew of the couple discusses his or her first geffilte fish and the Jew or Jewess talks about his or her first moving Church service. What’s next? MTV presents Women. Who Love Women – The Shocking Park Slope Story! Man… that’s quality reality television.

Not. Unless the interfaith couple in question are also meth addicts with Tourette syndrome. That I would PAY see! In fact, want to make me happy? Look on the right side of the page. There you will see a box titled JewliciousTalk. Plug a mic into your computer, click on the Say it! button and share with us your best rendition of a Jewish interfaith couple addicted to meth and suffering from Tourette’s. I’ll PayPal $10 to whoever makes me laugh the hardest.