From the Narrows I Was Liberated 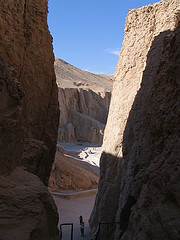 â€œMin ha-meitzar, karati Yah, anani ba-merchav Yah. Out of the narrows of distress I called upon God, God answered me with liberation (Psalm 118:5).â€

With these same words we cast our sins metaphorically into fresh waters during Tashlich, one of our most esoteric and forgotten rituals. After understanding the meaning of this verse, and the Tashlich ceremony, a beautiful way to unlock the spiritual mission of Rosh Hashanah is revealed.

In the Me’am Loaz, 18th century Ladino-Turkish commentary, it is written that this verse recounts the occasion of King David’s deliverance: â€œOut of a narrow place, where I found myself standing, with no way to turn, right or leftâ€”from the depths of my despairâ€”I called upon God for deliveranceâ€¦. God took me out into a broad expanse. Just as King David did not despair of redemption, we are not to give up hope even in the midst of the most terrible distress of exileâ€¦.â€

The Hebrew word tashlich means â€œyou shall cast away.â€ The entire custom is based on Micah (7:19) â€œAnd You shall cast all their sins into the depths of the sea.â€ Tashlich is performed in the afternoon on the first day of Rosh Hashanah (except on years when the first day is Shabbat, and the custom is moved to Sunday). Some recite Tashlich on the eighth day of Tishrei, and it can even be recited until Hoshanah Rabba, which is, according to real kabbalah, the last opportunity for repentance.

Tashlich is preferably recited near running waters that sustain life. Praying by a body of water reminds us of Creation and its purpose, and Rosh Hashanah is also the anniversary of Creation. Water is a sign of humility, as it says in Lamentations, â€œpour out your heart like water before the face of God.â€ Our insecurities and weaknesses, which were blocking our growth, can be washed away like water and disappear. The Shechinah, the indwelling presence of God, symbol of purity, mikvah, is strong near water. We pray by water as we seek to purify ourselves and seek the presence of the Shechinah in our lives.

The verses that make up the main prayers of Tashlich have special kabbalistic meanings and are taken from Micah, Psalms, and Isaiah. They correspond to attributes of God mentioned in the Torah, such as â€œGod is slow to anger, great in love, and forgiving sin and rebellionâ€¦.The Earth shall be filled with the knowledge of God, as water covers the sea.â€ After shaking out our garments and pockets, casting crumbs in the waters, many have a custom to recite a prayer for parnasa, to make an honest living.

Ashkenazi and Sephardic Jews observe Tashlich, though there is no direct reference of it in the Talmud or early rabbinic writings. Even the16th century Codex of Jewish law, the Shulchan Aruch, has barely a mention of it. Tashlich seems to be an invention to help Jews complete their spiritual mission on Rosh Hashanah.

The spiritual mission of Rosh Hashanah emanating from the sound of the Shofar is strong, penetrating, yet ultimately wordless. The Shofar is a primal, genetic call. However, as the distance from the Shofar blasts accompanying the giving of the Torah grew, the message of the shofar needed to be deciphered. That is why Tashlich was created.

Tashlich does not have more potential or reach spiritually higher than the shofar. Tashlich translates the meaning of the call of the shofar into terms and prayers that we can fathom. That is why the Shofar and Tashlich use the same verse, â€œFrom the narrowsâ€¦liberation.â€ And what are we saying?

God, I am really stuck here, in this rut, these habits, bad relationships, unhealthy modes of thinking, in dead end jobs. I am broke â€” financially and spiritually â€” and I ask you from the depth of this despair, can you help? Can you offer me a hand God?

As we stand by living water, in the presence of the Shechinah, we pour out our hearts like water, the barriers to spiritual and personal growth are washed away, and we hear the voice of King David echoing throughout Jewish and personal history, from Egypt till the Crusades, from Babylon to the Holocaust, from enlightenment to assimilation â€” I will not give up on you Jewish people, don’t give up on Me. Here, take my hand.

â€œOut of the narrows of distress I called upon God, God answered me with liberation.â€