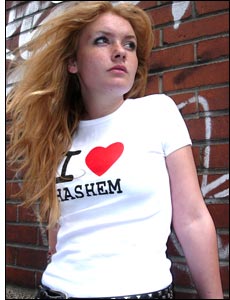 Well… glad you all noticed… It’s pretty much done for now absent a few minor tweaks. As has been noted, the site loads much faster now. We’ve added social bookmarking, live search on the bottom right column and a design that is cleaner, less cluttered and, well… faster! In the future we’re going to add more Ajax enhancements and other stuff to make the surfing experience even better.

For those of you who miss Kathleen, well, here’s another pic of her for you to enjoy. The new “I Love Hashem” Gal is Israeli. Her name is Mor and she lives in Jerusalem. You can, if you insist, get her shirt here. The photo came from a photo shoot I did for the current cover of World Jewish Digest. It’s for a story by Tobin Belzer about Jewish 20- and 30-somethings and what the hell it is exactly that they want. The article discusses Jewish identity and actually fits in rather nicely with Esther’s last post on the topic.

But it is a good question though. And having waded waist deep in the back end of Jewlicious, I’d like to know the same thing. Just what the hell is it that you want?

For instance, do you all want a message board where you can talk to each other freely? Will it be used or will it just languish? Is the comments section enough in terms of discussion? I am also contemplating the possibility of allowing free registration to Jewlicious – meaning, people will be able to register and submit posts which we will moderate. There’ll be no guarantee that posts will get posted but opening Jewlicious up a bit might not be a bad idea. Also subscribers who get their posts approved enough times might be able to eventually become actual regulars, allowed to post whatever they want without moderation.

I am also contemplating a digest system – one that will send periodic notifications of recent posts via email to anyone who chooses to subscribe. You can already subscribe to comments on a particular post (look at the bottom of the comments box) and I am pleased to see that many of you already have. I am also open to any other ideas that anyone might have that would increase this site’s functionality.

I don’t know. These are just random thoughts. I’d of course totally appreciate your feedback. None of these radical ideas have been implemented and none will be without further discussion with the existing Jewlicious gang. But what the hell, we can think about it right?

The track below is titled Beautiful. It’s off of Moby’s new compilation album due to be released in November called Go: The Very Best of Moby. I know no one listens to techno anymore, but Moby’s all growed up now. Even Debbie Harry (Blondie) makes an appearance on the album. I picked this track because, well because you are all so beautiful!