The Real Sign that Israel is Becoming a Little America… 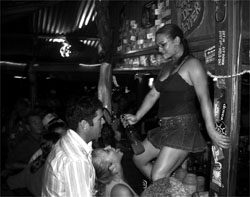 New law calls for closing bars at 2 a.m.
The Ministerial Committee on Laws, which is a sub-committee of the cabinet, approved a law proposal 5-2 on Sunday that calls for all bars and pubs to close their doors at 2:00 a.m.

At present, bars in Israel are not required by law to close at a certain hour.

The proposal was presented by Kadima MK Ruhama Avraham, who said, “The popularity of the proposal is not a consideration, rather its ability to save lives.

“The scourge of violence and the slaughter on the roads must be answered,” she said.

Similar drinking laws have been adopted in many states in the US, as well as England, Ireland, Sweden, Belgium and Norway. The law was recently implemented in Tokyo, Japan.

The phrase ‘some research’ alwasy sounds fishy to Muffti. His own research confirmed that, unless there is a good after hours party scene, such laws are associated with a 43% drop in fun. strange bedfellows bar owners and police have both denounced the bill.