Adventures in Babylon: Good For The Jews 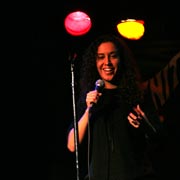 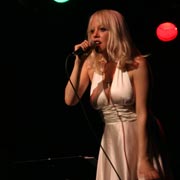 Last Thursday, I attended the first show of the Good For the Jews concert tour. It’s really remarkable how much Jewy stuff goes on in New York, especially this time of the year. Maybe people just need a safe harbor from which they can be spared the endless Christmas ditties… So instead we get Rob Tannenbaum’s shmaltzy Jew ditties! I saw Rob at the Just For Laughs Festival Bar Mitzvah Show when he was still performing with Sean Altman. Sean’s since started his own Jew thing called Jewmongous and both shows share guest performers and musical numbers. No, the split was not amicable.

So about the show. Rob is certainly earnest. His new sidekick, David Fagin of indie pop icons the Rosenbergs is cool. There’s some new material, but really it’s all the same… corny lyrics, self-referential catskills-type jokes, Rob is still performing in his bar mitzvah suit, it’s all just so… aw heck, who am I kidding. I laughed. I had a good time. I hate Rob for forcing me to be honest and admit I like shmaltz. There goes my friggin street cred. The show I saw at the Knitting Factory in New York also included comedians Todd Barry (surly mo’ fo’ – Letterman, Conan O’Brien, Sex and the City, Road Trip, Pootie Tang etc.) and Rachel Feinstein (Premium Blend, Samurai Love God – a new Sarah Silverman for those who fetishize female Jewish comediennes – when she imitated her Mom I swear I got the opposite of a woodie!). Also present was country singer-cum-evangelistTammy Faye Starlite. She was a riot and a total bonus!

The show’s already been to New York, Boston, Philadelphia and DC. Good For The Jews next performance will be in Milawaukee and Chicago on the 23rd and the 24th of December. See? Not everyone ignores the midwest! Go to the Good For The Jews Web site for schedules and ticketing information.