Iranian Holocaust Conference is a Go! 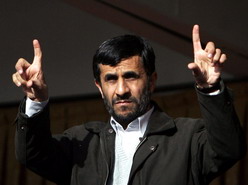 As John noted on his new blog nunbet.net, Iranian president Mahmoud Ahmadinejad has clearly seen and been influenced by the Borat film. Note the similiarity between Ahmadinejad’s pose pictured here and Borat’s Jew claw/horns thing in this out take from the movie.

But here’s the thing, see… all the anti-Semitism? It’s a joke. It’s not serious. Jews do not have claws or horns, nor do they control the world and they did not fake the Holocaust.

The joke was clearly lost on Ahmadinejad and the assorted mullahs and idiots that run Iran as they have just announced the details of a conference questioning whether the Holocaust really happened. This conference, sure to be a veritable laff-riot, was inspired by the international outcry caused last year when Ahmadinejad described the slaughter of six million Jews by the Nazis as a “myth” fabricated to justify Israel. Manouchehr Mohammadi, a spokesperson from the Foreign Ministry stated that:

“Our aim is to scientifically study the Holocaust and listen to both sides before reaching a conclusion,” Mr Mohammadi said. “This issue has a crucial role regarding the west’s policies towards the countries of the Middle East, especially the Palestinians. Iran isn’t against or for. We weren’t involved in this event so we can be a neutral judge. It is important for us to know the answer so that we can process our stances to issues in this region. If we conclude that the Holocaust happened, we will admit it but we are still going to ask why Palestinians have to pay.” He said it would not be a forum for anti-semites or neo-Nazis, and rabbis would attend. “Our policy doesn’t mean we want to defend the crimes of Hitler.”

Oh my God – This is nearly as funny as the Borat movie!! Ha ha ha ha haahahaa! Thanks for the laugh Prime Minister “Wipe Israel Off the Face of the Earth!”