Larry Mark just keep cranking them out! This is the fifth in a short series of guest posts on the Jewish aspects of The Sundance Film Festival.

Park City, Utah is a town of 7,300 residents, five percent of whom, anecdotally, are licensed real estate agents. Each January, the town’s population grows six-fold, as 45,000 cinema-philes visit for the Sundance Film Festival.

Two of those visitors this year were nice Jewish men who traveled near and far, borrowed funds, and maximized their credit card balances to make their documentaries.

Elizabeth Cohen, the soul of his film, is a reporter for the Binghamton Press and Sun-Bulletin, and first happened on the story of Marla Olmstead, an upstate New York four year old with two working parents, whose abstract paintings were becoming a sensation in Binghamton.

Amir Bar-Lev’s documentary deftly shows how the news-cycle pounced on this one newspaper story. After the account’s appearance in The New York Times, international radio, newspaper, and television producers picked up the story on this potential child prodigy. As the film progresses, Marla and her family get flown to Manhattan and appear on various daytime talk shows.

Initially, Bar-Lev traveled to Binghamton NY, and did not plan to profile the Olmstead family at all in his digital meditation on modern art and subjectivity, and the obsession people have with child prodigies. But after months of filming, a â€œ60 Minutesâ€ episode accused the Olmstead family of perpetrating a hoax. This forced a change in his focus.

Ironically, while Bar-Lev’s film shines a light on those who profited from the story – the predatory media producers, the gallery owner, and Marla’s parents â€“ his documentary was reportedly acquired at Sundance by Sony Pictures Classics for close to $1.8 million. Not bad. He can now pay back his Israel-born parents, his friends, and his relatives, and be able to hold his head high at future holidays and family events. 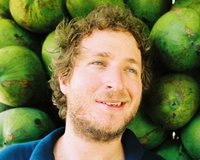 Jason Kohn is another nice Jewish guy who had his film accepted by Sundance this year. But instead of Binghamton, he traveled to Brazil. Kohn, whose grandfather operated a Manhattan retail store that catered to Brazilian tourists, had an apprenticeship with documentary master Errol Morris. Kohn traveled to Brazil, one of the world’s most politically corrupt nations, to visit his father. The result was the creation of his documentary, MANDA BALA (Portuguese for “Send a Bullet”).

In MANDA BALA, Kohn beautifully profiles a variety of subject and ties them all together. The film is rich with Brazilian music and lush landscapes, but it is essentially a story about how a general equilibrium is reached as the rich steal from the poor, and how the poor steal back from the rich. His subjects include: the owners of a frog farm who are caught up in a $2 billion money laundering operation; a kidnapping victim who recounts her torture; a leading businessman from Sao Paulo who spends hundreds of thousands of dollars on bullet proofing and his personal safety; the heroic police detectives and officers who save kidnap victims; a wealthy cosmetic surgeon who specializes in reconstructing the effects of torture and the lacerated ears of kidnapping victims; and a vicious Brazilian criminal who acts as a modern day Robin Hood.

For his efforts, Kohn’s film received the Sundance Grand Jury Prize for Documentary Filmmaking on the last evening of the festival.

For Kohn, filmmaking was little riskier than when he filmed Bar Mitzvah’s and weddings on Long Island. For example, when interviewing a kidnapper, Kohn was told that he would be killed along with the family of his contact if the kidnapper’s true identity was revealed in the film. The kidnapper also kept firearms close at hand. Once, his close-circuit security system showed the police at his door. He quickly pulled out an arsenal of weaponry and stood ready and waiting to shoot the cops should they attempt to enter. Jason quietly sat next to him, filming and waiting.