What are America’s three most important allies, Senator Obama? 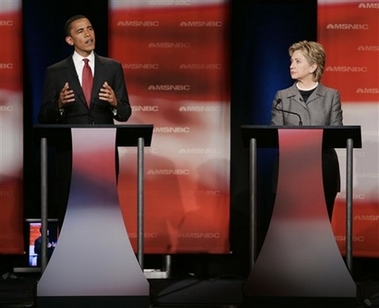 The commentators on BBC had a few choice words about the debate of Democratic Presidential hopefuls. Obama was asked a simple question. Name three important allies. And did he answer the question? No.

Of course the trademark of successful politicians is avoiding the questions, so lets not be under any disillusions as to who we have here. We have a novice Senator, with great charisma, charm and potential. But is he ready to be a front runner?

So who did he mention? Does he mention Israel? England? Canada? Mexico? Nope. He mentioned the EU (sic) and then NATO, and then rambles about Afghanistan. Then Japan. Yeh, that was a good line, just after Toyota takes over as the car king, and leaves Detroit in the dust. Hmmm. In fact, perhaps Obama thought the question was, “Who are our three biggest competitors?” He mentions the EU, Japan, and China. Now you can be a competitor and an ally, but what ARE the three most important ones? Who puts their tuches on the line for the US? Which country admires the USA, even with all our faults? Its not the EU, or Japan or China. There are strategic allies, political allies, economic allies. Bu I would guess that the question reffered to which countries can we count on.

Senator, the number one country you can count on is Israel. Israel is America’s greatest ally.

Quote from transcript below, from Democratic candidate debate:

Senator Obama, what are America’s three most important allies around the world?

OBAMA: Well, I think the European Union as a whole has been a long-standing ally of ours, and through NATO we’ve been able to make some significant progress. Afghanistan, in particular, is an area where we should be focusing. NATO has made real contributions there.

Unfortunately, because of the distraction of Iraq, we have not finished the job in terms of making certain that we are driving back the Taliban, stabilizing the Karzai government, capturing bin Laden and making sure that we’ve rooted out terrorism in that region.

OBAMA: We also have to look east, because increasingly, the center of gravity in this world is shifting to Asia. Japan has been an outstanding ally of ours for many years.

But, obviously, China is rising and it’s not going away.

They’re neither our enemy nor our friend. They’re competitors. But we have to make sure that we have enough military-to-military contact, and forge enough of a relationship with them that we can stabilize the region.

MODERATOR: Senator, thanks. I’ll give you a follow-up.

I didn’t hear you mention Israel, and I ask because there is a quote attributed to your name. You said recently, “No one is suffering more than the Palestinian people.”

Do you stand by that remark?

OBAMA: Well, keep in mind what the remark actually, if you had the whole thing, said. And what I said is nobody has suffered more than the Palestinian people from the failure of the Palestinian leadership to recognize Israel, to renounce violence, and to get serious about negotiating peace and security for the region.