The Plight of Agunot Continues Unabated 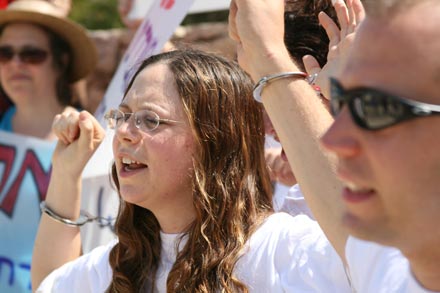 ROI 2007 Alumna Inbal Freund and her group held a demonstration today as part of the ICAR coalition for agunot and mesoravot get which includes 25 organizations. From Inbal at Mavoi Satum: 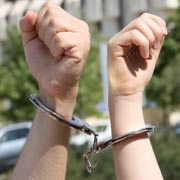 The ministerial committee dealing with legislation has approved a proposed law to broaden the authority of the rabbinic courts. It aims to increase the court’s mandate by giving it jurisdiction over matters of property as well as regarding issues applicable after the get (religious divorce) is given… As it stands at the moment, giving a get is used as a form of blackmail. The broadening of the court’s authority will simply increase the use of this blackmail with the backing of the rabbinic courts. The proposed motion is part of a worrying process giving extended powers to the rabbinic courts at the expense of womens’ rights.

According to Inbal, the proposed law was passed by the ministerial legislative committee but an appeal was lodged against the law by MK’s Herzog and Aharonovich. A decision regarding the appeal will be made today at the Knesset. In opposition to this proposed law, Inbal and her group held a demonstration today opposite the Prime Ministers office in Jerusalem. About 50 people showed up, most dressed in white and many bound to each other in handcuffs, symbolizing the plight of religious women whose husbands refuse to grant them a divorce, thus preventing them from remarrying and having more children.

This sort of thing makes me nuts. It reminds me about what a hit the Jewish people took from the Holocaust. How many bold Torah scholars did we lose? How many true Gedolim were reduced to ash, thus leaving the evolution of religious Judaism to lesser individuals – individuals too scared of clearly anachronistic tradition to make any real progress in an issue as clear cut as this. Surely if they can determine to scientific precision what length of sleeve or skirt constitutes tznius (modesty) – how much flesh can be exposed before surrounding men’s imaginations go into lust inspired hyperdrive – well then surely a halachic solution to this issue can be found.

Now I’m no Torah scholar, but it seems to me the mitzvah of going forth and multiplying takes precedence over whatever retarded rationale allows a woman of child bearing years to have her womb remain fallow while her asshole husband remarries and refuses to grant his first wife a divorce. The Rabbis say there’s nothing they can do about that – perhaps instead of bringing handcuffs as props, Inbal and the protesters should have brought limp dicks.

Anyhow, lots of press was there, both domestic and international and I am sure you’ll read more about this issue in the coming hours and days. You should also visit Mavoi Satum‘s Web site for more info.