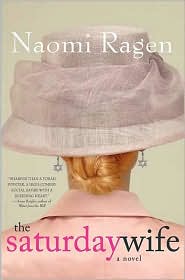 In her new novel, I think Naomi Ragen meant to echo the sentiments of Gustav Flaubert’s â€œMadame Bovary

.â€ But, after reading the first six pages of â€œThe Saturday Wife

,â€ all I could hear was the narrator from ABC’s â€œDesperate Housewives

Like â€œDesperate Housewives,â€ this book is supposed to be satire but it never quite achieves its goal.

Let me explain: satire can be difficult for a writer because you could end up putting out something that’s actually celebrated by the targets of your satire when they don’t realize they’re being made fun of.

Hence, â€œDesperate Housewivesâ€ and its legion of fans who empathize with the characters.

In â€œThe Saturday Wife,â€ Naomi Ragen meant to poke fun at the overt materialism frequently found among certain Orthodox Jews. But, like a bad television show, this book’s characters are wooden and the plot is mostly predictable. Worst of all, some readers may not only identify with the materialism but they’ll find it a real hoot.

Unlike the popular ABC television program, the book contains lots of small digs at modern Orthodox life. Here is an excerpt from a scene where the lead character, Delilah Goldgrab (do you think her name gives away her defining quality?), begins to pray but, instead, Ragen diverts us to a not-so-thinly-veiled jab at a popular Orthodox book publisher:

Â â€œPlease, God, I know I haven’t been behaving myself the way You’d want,â€ she whispered, then stopped. It sounded like she was talking to a school principal. She took a deep breath. â€œDearest Father in Heaven,â€ she began. But it sounded so phony, so Holy Scroll Press, that religious publishing house that translated Hebrew prayers into unbearable English and published books professing to be compilations of standard Jewish laws but were actually modern reinventions so stringent and reactionary they made Maimonides look like a flaming liberal. Â

It’s not a matter of whether you agree or disagree with the sentiment. It’s they way Ragen delivers these types of observations as asides that cry out for attention (lest they be perceived as an afterthought) rather than embedding them seamlessly into the plot.

The book follows the travails of Delilah Goldgrab Levi as she grows up in Jewish New York and moves to a wealthy suburb in Connecticut. From the beginning, her priorities are out of whack. While in college, she gets a reputation after a brief affair with a Yeshiva bum. Soon afterwards she marries not out of love but out of a fear of winding up alone. Her husband, Chaim Levi, is a not-so-bright but very sincere young rabbi who stands to inherit his grandfather’s pulpit at an old synagogue in the Bronx.

Delilah is unhappy almost from the start of her marriage. Their apartment is too small, the congregation is too old and she doesn’t like being a rebbetzin. She almost has an affair with another man but she runs out of his apartment at the last moment. Coincidentally, her husband’s grandfather is downstairs at a chiropractor’s office and sees Delilah running out. Lucky for her, the grandfather has a stroke and never recovers.

With grandpa dead, the congregation falls apart quickly. Many people leave and Chaim needs to find another job. At the urging of his wife, he takes a job at a very wealthy congregation in Connecticut that had been without a rabbi for several years after the last one was unceremoniously dumped by an ungrateful board. It was a scandal and Swallow Lake had been blacklisted among the rabbinate ever since. Chaim’s acceptance of the job makes him a pariah among his colleagues.

At first, Delilah thinks she’s died and gone to upper middle-class heaven but later she begins to crave the lifestyle of the ultra-wealthy in her midst. At the same time, she’s having trouble making friends with the other Swallow Lake housewives. Then she meets Joie Shammanov, the wife of the wealthiest, most powerful man in all of Swallow Lake, Viktor Shammanov.

The Shammanov’s are not members of the congregation but Delilah and her husband introduce them to members of the community and they soon become involved in Jewish life. The climax of the book is the bar mitzvah of little Anatoly Shammanov. It is the biggest, most expensive bar mitzvah celebration you can imagine, replete with rock star appearances, Los Angeles Lakers cheerleaders, acrobats and trained dolphins. Oh yeah, I forgot to add that all of the guests had to flown out to Maui to board the ship where all of this took place.

It’s at the end of the book that we learn things are not always as they appear. The Shammanov’s are, well, they are a sham. Viktor is wanted for fraud for selling shares of an oil company he didn’t own. The financial fall-out affects the whole community and the Levi’s are forced to leave after they’re blamed for introducing everyone to the Shammanov’s. As the old saying goes, the good Lord giveth and the good Lord taketh away.

There’s room to believe Delilah may have learned a lesson in all this. I don’t think she did but Ragen never says one way or the other. And that’s a shame because the book needed more of a resolution than the one provided.

I’ve never read anything else by Naomi Ragen but from what I’ve heard, she’s written better books in the past.

Here’s hoping she rebounds with something that’s actually worthy of a comparison to Madame Bovary.