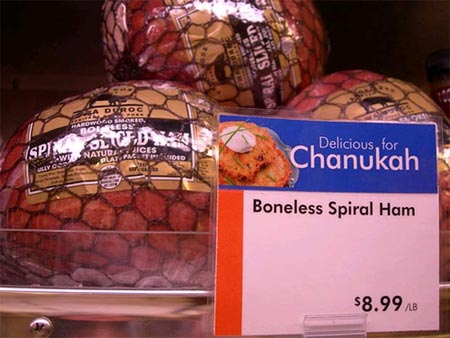 This photo, taken by Nancy Kay Shapiro and then reproduced in Gothamist, at first seems like a silly error, the product of some clueless clerk at Balducci’s. But then I read Bah, Hanukkah by Christopher Hitchens over at Slate, followed by A Very Osama Hanukkah and The Festival of Lights Cartoon on Jewcy, and finished it off with Who are Today’s Maccabees over at Jewschool.

These all point out that the Maccabees engaged in activities that by today’s standards would not exactly be nice. They note that Al-Quaeda, Iraqui insurgents and Islamic Suicide Bombers have much in common with the heroes of Hanukkah. Hitchens believes that “when Judaism repudiated Athens for Jerusalem, the development of the whole of humanity was terribly retarded…”because it led to the development of Christianity and Islam and the continuity of Judaism, “an ancient and cruel faith.” Eli Valley and David Kelsey’s cartoon portrays Jewish Hellenists as innocent humanists who just wanted to be left alone and to live in peace and who were not at all complicit in Hellenist oppression of the Jewish faithful. His depiction of the Maccabees as “bloodthirsty bastards” is echoed in fellow Jewcer Steve Almond’s Osama article. I am going to once again ignore the fact that the wedding party that was attacked by the Maccabees was peopled by a clan that had earlier robbed the Maccabees and were responsible for the death of one of their brothers. I’ll ignore the fact that holding aloft the severed head of a vanquished general, while not pretty, is not exactly the same as beheading innocent civilian non-combatants. I’ll just ignore a whole mess of details and agree with everyone – those Maccabees were bad, bad people. Not at all warm and fuzzy. Not. At. All.

One fact I won’t ignore is that much modern Hanukkah celebration in the diaspora is just Christmas envy. Had many of these celebrants lived at the time of those murderous Maccabees they would in all likelihood have been their victims.

Thus rather than laugh at Balducci’s error, what we should do is gain inspiration from it. See, the proper way to commemorate Hanukkah is not by “lionizing” the Maccabees. If we truly value tolerance, if we are really opposed to Theocracy and “tribal Jewish backwardness,” if we really cherish freedom, tolerance and inclusiveness, we should commemorate Hanukkah not by lighting Menorahs or eating sufganiyot and latkes. Fuck that shit. What we should do is eat pork.

Steve Almond’s Osama article recounts the martyrdom of the woman who chose a horrific death at the hands of Antiochus’ soldiers for her and her seven sons rather than eat pork. What a stupid cow. What a “disturbing emphasis on martyrdom.” She was seriously no different than those assholes that blow themselves up in Pizza Parlors and Falafel stands or fly Jumbo Jets into office buildings. How better to demonstrate the values cherished by most American Jews than by rejecting everything those Maccabee thugs stood for?