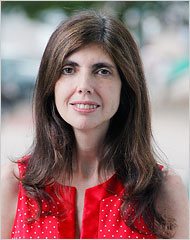 Earlier this week, the Jewish Book Council announced the winner of the $100,000 Sami Rohr Prize for Jewish Literature.

Lucette Lagnado, a former editor at the Forward and currently an investigative reporter at The Wall Street Journal, won the prize for her 2007 memoir, “The Man in the White Sharkskin Suit: My Family’s Exodus from Old Cairo to the New World.” (For my review, click here.) The book traces almost 100 years of Lagnado’s family history, with particular emphasis on the arc of her father’s life.

Her father, affectionately known as â€œThe Captain,â€ goes from being a successful, cosmopolitan businessman who thrived on the nightlife of Old Cairo to a Brooklynite tie salesman who scraped out a living and never really felt comfortable with life outside Egypt. The tale mirrors those of hundreds of thousands of Jewish immigrants from Arab lands who reluctantly left (or were forced to leave) their homes in the years following the creation of the state of Israel in 1948.

Ms. Lagnado kindly answered several questions I sent to her via email about her plans for the prize money, her writing process and the book’s reaction in Egypt.

Steve Pollak: Was it cathartic for you to write this book? I got the feeling while reading it that it was as much about your father’s life as it was about you letting go of the nostalgia for Old Cairo.

Lucette Lagnado: Working on the Man in the White Sharkskin Suit wasn’t in my mind about catharsis or nostalgia — it was about trying to explore what I saw as the fall from grace of a man — my father — and also trying to grapple with what I saw as a lost piece of history, what happened to the lost culture of the Jews of Egypt.

I had always known that once upon a time there existed an extraordinary multi-cultural society — one that embraced Jews and Moslems and Christians — and that was also incredibly glamorous and urbane, and that was the society, Old Cairo, that I sought to recreate in my book.

Perhaps for the idea of a society that seems unthinkable to us Americans — one where Muslims and Jews and Christians could work together and socialize and party and then go off to their synagogues and churches and mosques to pray. We can’t even imagine that in Post-9/11 America…

Do I think it was cathartic? I certainly had an extraordinary compelling need to work on this book and I did so obsessively; I would like to tell you that I attained closure or catharsis but I am not sure I can say that, honestly.

SP: Do you have any plans for the prize money?

LL: I see the prize money as allowing me the freedom to work on another book — since I find my sensibility is poised somewhere between Cairo and New York, that means needing to do considerable travel for research as I had to do with Sharkskin — to go back to Egypt, and probably to Israel.

The projects that I love tend to be expensive undertakings — I found that with Sharkskin I raided my bank accounts and came to depend on my husband for “Pin money” — $5 or $10 here or there very literally to function; I took a significant leave from The Journal and went without a salary to focus on this exclusively.

I spared nothing to get it done. I sought out people around the world who had known or had dealings with my father…

What is so marvelous about the Sami Rohr prize is that it gives me the breathing room and the financial wherewithal to do this work I love, basically. I am unbelievably grateful.

Let me give you a specific example of a trip I longed to take but ran out of money. There is a chapter in my book about my “lost uncle” who had converted to Christianity and become a priest in a Jerusalem monastery.

I was absolutely haunted by this story — I desperately wanted to go to the monastery — but I ran out of money. If I need to undertake a similar research trip for another book, what is so terrific is that I will simply be able to get on the plane and go…

And by the way — when I go G-d willing to Israel in April, I hope to at last see the monastery at Ratisbone where my uncle died.

The prize opens so many doors, it is simply extraordinary. It is as if I have a guardian angel…

SP: What’s been the reaction from Egypt? Have you heard anything from readers or critics there?

LL: I met the Egyptian Ambassador to Washington at a party thrown for me by a former congressman, Steve Solarz, in Washington.

He was very friendly and said he saw this book as a book about “love” — the love between a father and a daughter. I have gotten many letters from Egyptians who saw the excerpt of my book that ran in the Wall Street Journal in July and they said they loved what I said about Cairo as it had been.

By and large it has been very friendly. I even received some help and formed bonds with some Egyptian diplomats based in New York. One who is now in Israel would call me “Loulou” when I would come to see him on research questions.

I think the most fantastic reaction from an Egyptian — from anyone — came from a retired Egyptian diplomat. This one resides both in New York and in Egypt.

He sent a lengthy typed letter where he told me my book had reduced him to tears. It amounted to an apology a personal and unofficial apology for what had been done to Egypt’s Jews.

It is for me the most precious document on earth. I was very deeply moved —

Now of course not every Egyptian adores my book; I am not sure this is a story they wanted; but I think there are those among them who appreciate it very very much.

SP: Did you have a writing schedule when you wrote this book? For instance, did you try to cram in an hour in the mornings before work or did you take time off from the Journal and write for 8 hours a day?

I was absolutely oblivious to my contract, which called for 100,000 words; I actually turned in 190,000 — 825 pages or basically double the required length.

I had to take several months to trim it back to 425 pages with the help of my editor at Ecco the sublime Lee Boudreaux; though I nearly died doing so admittedly.

SP: Do you have a preference for when you write? Mornings or evenings? Middle of the night?

LL: I like to work in the late afternoon through to the middle of the night. I love to work when it is absolutely quiet actually.

SP: Any plans for another book? If so, what would you like to write about?

LL: I am hoping for a companion volume; I am a bit superstitious about spelling it out —

Let me simply say that I have done about 100 lectures in recent months and the question that audiences ask me again and again is what about Edith’s story?

That is a strong possibility; but there are others; I think that I want to pursue what happens to Loulou…

Can I try to check in with you about that a bit later…that is definitely the priority though, no question.