In defense of secularism, shirts 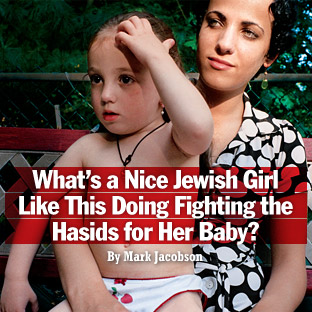 As is the case, I’d imagine, for most secular Jews, my relationship to Ultra-Orthodox Jews is conflicted. On the one hand, I realize that if they start getting attacked on the streets, this means anti-Semitism, and is bad news not just for them, but for those like myself. On the other hand, getting an arranged marriage at 17, dressing for the Polish winter in the New York summer, and the many rules interfering with such questions as gentiles looking at wine; men and women shaking hands; and taking the elevator on Saturday (unless it stops on every floor) strike me as, well, horrible. (Depending on which part of the faith we’re talking about, the fact that I’m pro-Israel further distances me from many in these communities, who believe that Israel should not have been established.)

Unlike some others, I feel comfortable disapproving of their lifestyle while respecting the fact that they no doubt disapprove even more vigorously of mine. And it’s great that we can all, for the most part, live in peace in this country. But the point is, whatever solidarity I feel with Hasids and others of this ilk comes from a sense that we share ancestry and enemies. That’s the extent to which I can relate. While the sight of the Ultra-Orthodox gives some less- or non-Jews a feeling of guilt, a sense that look, these people are the real deal, I feel nothing of the kind. For a sense of why, have a look at this movie. A willingness to stand out in public (admirable) and oppress in private (less so) does not make any particular group of Jews the ‘authentic’ ones.

That said, what on earth was New York Magazine doing, putting a topless shot of an ex-Hasidic woman’s 4-year-old daughter, sitting with her (clothed) mother, on the cover? Yes, yes, provocative, I get it, but why put the child in more danger than she’d be in otherwise? This is America, for god’s sake, not Europe. We are not so cavalier about nudity in these parts. I doubt if the average ‘of course I breast-feed in public’ Park Slope mom would agree to having her daughter photographed in this way, on the cover of a major magazine, even if the magazine’s proceeds benefitted local farms, green tote bags, and Obama. In other words, the cover is bad taste defined.

As for Mark Jacobson’s article itself, the conflict of authenticities between the old-time liberal New York Jewish great-grandparents and the hippie-gone-Hasid grandmother is quite interesting. If only the piece didn’t begin with a reference to the above-mentioned child “sitting, princesslike, in the child’s seat,” soon to be followed by a mention that certain Hasids “only came to Wal-Mart for the big sales.” Princesses, sales, princesses, sales… something is starting to click. This story, is it by any chance about Jews?