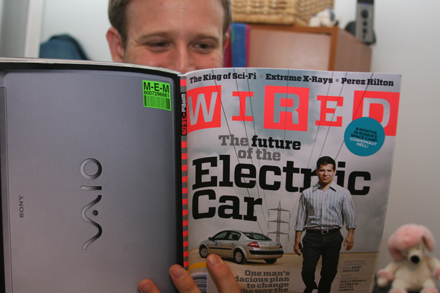 Looking over at the new September 2008 cover of Wired Magazine, I spied a familiar face – Shai Agassi, the electric car evangelist who has spoken at the Presidents Conference, ROI120, innumerable college campuses, and pretty much any gathering that would have him. His topic? Ending the world’s dependence on oil by replacing internal combustion engine cars with electric powered vehicles. I’ve seen him speak a few times and he has the presence and aura of an evangelist. He is bright, articulate and successful with a proven track record in business – he sold one of his tech companies for $400 million. Everywhere he speaks, people walk away in awe of the audacity and feasibility of his vision. In a nutshell, his plan is to use the cell phone business model where the car is the phone and the electricity is the talk time. Cars will be recharged using recharging stations which can replenish batteries or even replace batteries with new freshly charged ones. He has already raised $200 million and is set to roll out beta programs in Israel and in Denmark shortly.

He has impressed the heck out of some pretty heavy players and he meets regularly with high level politicians and captains of Industry. At the Presidents Conference, ordinarily cynical Israelis sat in awe as Agassi explained his plan. Now, he’s on the cover of Wired.

Of course Agassi’s plan isn’t perfect. While electricity will reduce Carbon emissions generated by cars by 20%, those Carbon emissions will be concentrated in poorer neighborhoods where coal fired plants that still generate most of the world’s electricity, will in all likelihood be located. Electric cars will require a massive investment in recharging stations – this can work in relatively small places like Denmark and Israel, but makes the plan impractical in large countries with relatively low population densities like the US (except for maybe Hawaii) where drivers cover large distances, even during daily commutes.

Agassi has answers for all the naysayers and while I am not sure I am completely convinced, man, the dude puts on a great show! So… go ahead and pick up the latest copy of Wired at your newsstand or read the article online. I know y’all are Jews and we don’t usually discuss tech matters, but I’d love to have an informed discussion on the feasibility of Agassi’s plan. I know I want it to work – I dream of a day where we are not reliant on oil and fossil fuels, but I am afraid that this fervent desire and all its geopolitical implications may color my ability to objectively assess Agassi’s project.

Also I pretty much know shit about cars, engineering, battery technology, high finance, business and anything else related to this story. Thanks to Muffti for his modeling assistance in the pic above.