57’69: The Jewish New Year or my polling results? Or Can I Wear a political kippah to Kol Nidre?

Happy Rosh Hashana 5769. In gematria, I am told that we can say the the 69 is Samech Tet, or Siman Tov (I think I went to school with a guy named, Simon Tov). So Tehei Shenat Siman Tovâ€”May This Be a Year of Good Fortune!â€ You know what is really weird? I just went to my Savings and Loan to check on my balance, and my teller was named LaShanna Tovah. Weird.

In gematria (5)769 is equal to Eliyahu Ha Tishbi, or Elijah the Prophet. If Eliyahu, who left the Earth in a hybrid ecological chariot, is supposed to herald the arrival of the Messiah. Maybe it means that that person will arrive in 5769? Or what if it portends something about the winner of the U.S. Presidential election race?

American Orthodox Jews, who consist of haredi, hasidic, modern orthodox, and just really Jewish adults, make up an estimated 10% of the Jewish prime vote in the USA. According to a recent poll, 78% of these voters are leaning towards the Republican GOP presidential ticket. 59 percent of those identifying themselves as Masorti or Conservative movement Jews supported the Democratic ticket, and 62% of those self identifying as Reform movement Jews supported the Democrats.

Former NY Congressman and NYC Mayor, Ed â€œHow am I doing?â€ Koch visited Florida and spoke with 1000 Jewish voters in four towns (the Jewish vote in Florida reportedly makes up 5% of the statewide voters) to explain why he is supporting the Obama-Biden ticket: primarily the issues were choice, preserving the right to safe abortions; protecting Social Security stipends from privatization; equitable taxation; gay rights; censoring library books; and the poor interview performance of Palin on issues of foreign affairs. At one venue, Koch asked 297 attendees to raise their right hands and repeat after him, â€œI solemnly swear that between now and Nov. 4, I will seek out 10 people who are committed to voting for Obama and Biden and make certain they go to the polls on Election Day. So help me, G-d.â€ 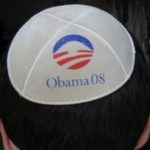 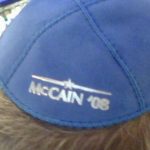 CAN I WEAR MY OBAMA KIPPAH TO KOL NIDRE?
Hmmmâ€¦ probably not. While a fun burberry kippah is okay for Purim, I think I will forego a political oriented or novelty kippah during the High Holy Days. They say we wear a kippah to show modesty, and on Yom Kippur one should be unassuming. Of course, this is not as bad as adorning the Torah with a Nike swoosh or political advertisement, but I think that once one is over age 25, one should try to act as an adult. So, humbleness will be my mantra, Isaiah’s words shall be in my mind, but, well, maybe I can keep my Obama button on my lapel, as long as it is not made of leather.

The Jewish Caucus and the Bailout Bill Some partisan pundits tried to deflect the blame on Monday’s defeat of a Bailout bill in the US Congress onto the Black and Hispanic caucuses. While 60% of Democrats voted for the Bill, only 28% of Republican members voted for it. 40% of the 20 members of the Hispanic Caucus voted for the Bill, while 46% of the 39 members of the Black caucus supported it. And, ummmâ€¦ what about the Jews? 67% of the 27 members of Congress who identify as Jewish supported the bailout legislation. Make of this what you will.

The Republican Jewish Coalition has taken responsibility for what some termed a nefarious â€œpush pollâ€ directed to Jewish voters. The 15 minute poll of 750 Jewish households in five swing states (Florida, Ohio, Pennsylvania, Michigan, and NJ), directed from a Manhattan call center, asked voters what they thought of the reported praise for Barack Obama by a leader of Hamas; and what they thought of Obama’s â€œfriendshipâ€ early in his career with a pro-Palestinian university professor. The RJC refused to answer whether one of the questions asked for a reaction to the claim that Barack Hussein Obama is a Muslim; the claim that his advisors are anti-Israel; or the claim that Obama sat on the board of a pro-Palestinian charity. Was it a plot to message test or scare Jewish voters away from Obama-Biden? The RJC denied that the motive for the poll was to influence voters. I will leave the conclusions to you, but most likely, since their latest ad campaign in the Jewish community deals with one of these items, they were probably message testing. Yeah right