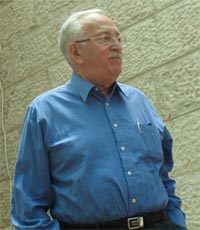 I remember, one of the first interviews I conducted was with Harry Hurwitz, founder of the Menachem Begin Heritage Center and a trusted adviser to former Prime Minister Begin. The interview was a great experience for me as one thoughtful answer flowed into the next. The narrative flow involved eloquently worded war stories, glory stories and personal stories about the former Prime Minister. He complimented me on my decision to make Aliyah to Israel at the ripe old age of 24. He was kind, respected and admired and possessed of a work ethic that would be admirable for a man half his age, arriving as he did, bright and early every day at his office for a full day of work. I sat with him at a recent bar mitzvah and kissed him and his wife at my boss Steve Liebowitz’s wedding less than a month ago. He passed away last Wednesday after suffering a heart attack on Monday.

Yisrael Medad of the blog My Right Word wrote a touching post about Harry. One paragraph stood out for me:

The Betar ideology highlights an attribute that Jabotinsky termed “hadar”, which means carrying ones self with the self-recognition that we are the progeny of kings and priests and prophets and as such, it implied a certain chivalry in conduct and life-style, a combination, as Jabotinsky would have it, of “outward beauty, respect, self-esteem, politeness, faithfulness”. We, who had met Menachem Begin, thought we knew what Jabotinsky meant. In meeting Harry, with his elocution, his sartorial elegance, his bearing, the concept became clearer. His wife, Freda, was the perfect complement.

G-d bless the memory of Harry Hurwitz. He was a true Tzadik.