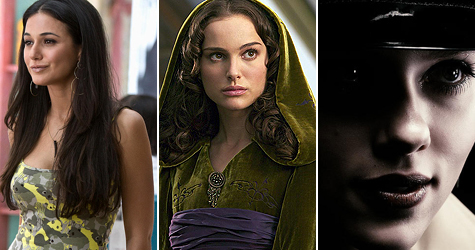 This is why Gil Student and Seraphic Secret NEVER link to Jewlicious. And yet, despite the fact that these articles are patently stupid, we persist in linking to them.

That having been said, this is actually one of the better “Lookit! Jewish women are capable of hotness!” articles. Put out by a gamer web site called UGO, the Top 50 Jewish Hotties is an almost exhaustive, pretty well written listing of famous and attractive Jewish women. Chaim “Shmegege” Shedayim writes:

The Jewish people, despite never in our history having a population greater than that of, say, Cameroon, have given so much to the wider world. The fundamental text of Western literature. The foundation of Western law and justice. That Jesus guy. e=mc2. Hollywood. Superheroes. Most of the Great American Songbook. Stan Getz. “White Christmas.” Philip Roth. The polio vaccine. ICQ. Han Solo. But perhaps our greatest gift of all to our pogrom-happy gentile friends and neighbors is one you might not expect: our fine, fine ladies. Jewish women have often been unfairly maligned by those self-haters in LA as ravenous maelstroms of emasculation supported by prominent noses, but those of us who came up within the maelstrom know the truth. Whether you’re after brains, curves or the secure knowledge you’ll never have (or be allowed) to make another decision ever again, the females of our tribe have got your number. What was good enough for Bogart is good enough for you – and here’s fifty pieces of proof.

Let me repeat that one line “But perhaps our greatest gift of all to our pogrom-happy gentile friends and neighbors is one you might not expect: our fine, fine ladies.” Nothing can in fact be further from the truth. A quick glance through this impressive listing shows a whole mess of “fine, fine ladies” who are in fact now married to “pogrom-happy gentile friends” culminating in #2 Scarlett Johannson, who recently wed the most goyishe looking Canuck I have seen in a long time.

I can’t help thinking that we, and by “we” I include myself, tend to celebrate Jewish women for their beauty because that’s somehow supposed to be exceptional. We appreciate their “midos” only when the term “midos” is a euphemism for boobs rather than good deeds. In doing so, we perpetuate this notion of Jewish women as exactly the opposite of what we are celebrating, thus driving them in greater and greater numbers into the hands of otherwise appreciative goyim. Of course the same holds true for the popular negative perceptions of Jewish men. We promote and foster these prejudiced views to the point where our own co-religionists don’t stand a chance.

So yeah. Thanks UGO and Chaim “Shmegege” Shedayim for the lovely eye candy and clever prose. But seriously? Fuck you. I know y’all meant well and everything, but yeah, what I said. Fuck you.