Are the Germans preparing a new Holocaust? 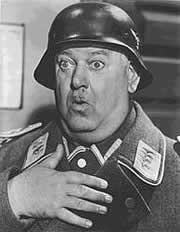 Johann Banner, who played Sgt. Schultz on Hogan's Heroes was a Jewish Concentration Camp Survivor. That has nothing to do with the post but I thought I'd throw that in.

Wow, that’s a pretty heavy headline for a first post. Do they let anybody write for Jewlicious these days?

Seriously now. â€œGermany and Jewsâ€ is always a hot topic for Israeli media, but this week I noticed two long articles that I thought might be interesting to compare and contrast. Let’s start on the left. Shay Fogelman wrote in Haaretz Magazine about a group of German-Jewish ladies (â€œyekkiotâ€) and the fact that lately Germans really seem to be interested in Israeli Jews with German roots.

“The yekke phenomenon has become very hot in the German media in the last few months,” [German journalist Charlotte] Misselwitz says. “It seems we rediscovered them.” Micha Limor, editor of Yakinton, an Israeli monthly for yekkes, also reports increased attention from the German press in the community. [â€¦] Personal letters have also started to reach the [yekkiot] women from all over Germany and Austria. [German-born Jewess Mimi] Frons describes their writers, some of whom remain anonymous, as “good-hearted people from the second generation [after the Holocaust] who read about us in newspapers and felt the need to express an apology or identification.”

Now let’s see what the more right-leaning media has to say about zeh Germans and their relationship with Jews and Israel. An opinion piece in Arutz Sheva by German pro-Israel activist Herbert Eiteneier starts with the words: â€œUnfortunately, when push comes to shove, one has to consider the official support of Israel by Germany as lip service.â€ My first thoughts were: C’mon, are you really going to go there? Well, he did. Apparently, Eiteneier really thinks the Fourth Reich is around the corner:

â€œI wonder how long official Germany will still pay its lip service. Should the left-wing parties be able to form the next federal government, expect a change of course soon. How long the [center right parties] will hold out paying their lip service and letting some honest people make a stand, I can’t say. But the virus is out. And I am convinced it will get out of control sooner or later.â€