The GA is the annual meeting of all the leaders, donors, professionals and partners of 157 Jewish Federations and 400 independent communities across North America. Those of us who keep a close watch on the organized Jewish community are very familiar with this network of organizations. They represent the main fundraising arm of the Jewish world in North America and fund the bulk of Jewish communal efforts. Typically a local Federation will raise funds which are then split one way or another between local needs and Israeli charitable concerns. There is hardly a major manifestation of Jewish communal life in North America that isn’t in one way or another supported by the Federations and many of Israel’s charitable ventures are similarly supported. From feeding the poor, to taking care of the elderly, to promoting Jewish education and culture – your local Federation is there helping to make it happen. 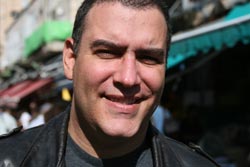 David Abitbol, aka ck of Jewlicious in Haaretz

And yet… in an informal survey of about 50 of my past Taglit Birthright Israel participants, only 6 knew what the Federation or the GA was and 4 of those actually worked for a Federation or Federation sponsored organization. Many are critical of the Federations, particularly in regards to their accessibility, transparency and responsiveness to the needs of the millennial generation. Those are the children of the baby boomers who are in larger and larger numbers, opting out of Jewish communal life or opting to go the independent route whenever manifesting their Jewish identities.

Keeping with that theme, I kind of went on a tear at a CafÃ© at the shuk and Raphael Ahren of Ha’aretz was there to record it and publish it in his paper.

“When some people, who want to do cool and interesting things, approach the organized Jewish communities and federations, more often than not they get resistance – in terms of money, in terms of support, in terms of anything,” Abitbol said last week during an interview in Jerusalem’s Mahane Yehuda market. “That is, if they even know to go there. Take your average kid who goes on [a] birthright [trip] and talk to him about the federations, he’ll have no idea what you’re talking about. We’re in a state of such horrific Jewish illiteracy – and I am not talking about the Ten Commandments and Moses, I am talking about everything: Kids are not participating, nor are they invested, in the communal Jewish structure.”

Raphael was kind enough to edit out all the cuss words. I hope I didn’t come off as too harsh – we’ll see if they let me into the GA later today – I expect we’ll have a lot to say about the coming events over the next few days.