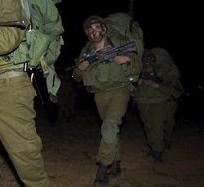 The night of Saturday, 3 January 2009, Israeli ground troops entered Gaza. Since then, they have killed over 50Â Palestinian gunmen, destroyed what was reported to be Hamas’ military headquarters, multiple tunnels in the Philadelphi corridor, a mosque which had been used to store and fire rockets, and several other targets. Approximately 500 Palestinians have been killed in Gaza since the beginning of the Operation. Over 400 of these were Hamasmen. With a force of approximately 1000 men, this means that Hamas lost approximately 40% of its force – a dire loss for any military apparatus. The IDF is moving to encircle the densely populated Gaza City, where Hamas has concentrated (or hidden) the bulk of its forces. The IDF has explained that this phase of the Operation, that of the employment of ground forces, is to function as a “root canal” against terrorism.

Why was the ground necessary? On the small scale, it is to stop rocket fire. How do you stop rockets from being fired? Destroy the rockets. For our purposes, rockets can be broken down into two subgroups: short and long range. Long range rockets can be destroyed by bombing, such as by an aerial assault. These rockets are larger, require more fuel, and thus render themselves more susceptible to destruction by air strike. Short range rockets, however, are not so easily destroyed from the air. (As a side notes, short range includes those rockets which can reach Ashkelon). These rockets are shoulder launched, relatively small, easily fired, and, also, easily hidden. The only way to stop them from being fired is to control the territory from which they are being fired. This has proven true statistically in that 73%Â of the rockets fired on Israel over the last week were fired from areas which the IDF now controls, and from which rockets are, now, not being fired. [Note: this does not mean that Israel wants to annex or occupy Gaza. No one, not the Likud or anyone to the Left, wants to occupy Gaza and another 2.1 million Palestinians].

The real goal of the military campaign, however, is not a body count (i.e. of gunmen, rockets, munitions, etc). Rather, it is to deter the enemy from using those means which are in their possession
(i.e. the ones you haven’t managed to prevent them from acquiring). At present the goal is to break the taboo that Israel would not put troops on the ground. This taboo was believed by Hezbullah in 2006 and was believed by Hamas for the last few years. It is the essential problem with casus belli. If you fail to act after stating that a given assault would be seen as casus belli, then you risk looking like a paper tiger. This is what allowed Hamas to attack a country which it knows to be 100 times stronger than it. A lack of a red light is perceived as a de facto Â green light. Without going into the reasons for which Gaza began to launch missiles into Israel quite heavily over the last 6 months (which includes an attempt to renegotiate the ceasefire terms in their favor, including the opening of the “border crossings”), it is evident that Hamas did not actually believe that Israel would attack them back, and certainly not with a ground incursion. The Operation will likely result in a ceasefire. The ceasefire will, in all likelihood, be broken in another year, 2 years tops, at which point there will have to be another, stronger, ground incursion. However, if Israel responds well, as in with a crushing force, there will not likely be a third time, or if so, it will be far smaller than the second time. Deterrence is built over time. We cannot convince these people to recognize Israel’s right to exist, nor can we convert them to Zionists. However, we can convince them that it is not in their interest to continue attacking Israel. [In deterrence literature, the parallel chosen is that of the school yard bully. You may not be able to convince him that it is wrong for him to steal your lunch money, nor can you make him like you, butif you punch him in the nose enough times and stand up for yourself, you can convince him that its not worth it for him to mess with you]. Let us hope that Israel continues to do well during this second part of Operation Cast Lead, and not withdraw too soon.