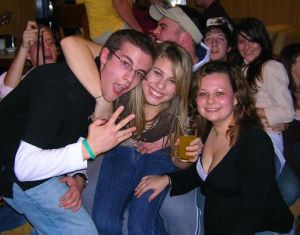 In other words they canceled their study abroad program. There are so many students at Rutgers that are Jewish, and over a hundred were there on other trips this winter.

RUTGERS â€”Nine students who planned to spend the spring semester studying in Israel had their plans interrupted when school officials deemed the trips too risky because of the conflict in Gaza….

Barry Qualls, vice president of undergraduate education, took responsibility for the decision to withdraw university approval of a program. Three students each would have been sent to Hebrew University in Jerusalem, the University of Haifa and Ben-Gurion University of the Negev.

The decision was made, said Qualls, “Because none of the three sites were considered safe from air attack and from suicide bombers.”

He said he made the final decision after consulting with the chairman of the university’s Department of Jewish studies, university counsel and Study Abroad, a program at Rutgers that sponsors study at universities in 20 countries.

“Even as we recognize that Israel lives under constant threat of attack and that Israeli universities have very thorough security programs to ensure students security, the situation there now is so volatile that we believed that we must suspend the programs for the spring term,” said Qualls.